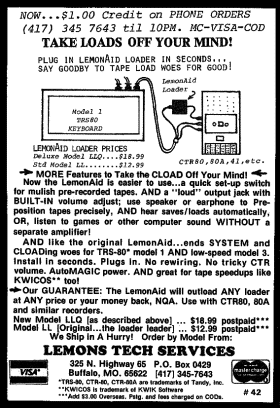 Lemons Tech advertisement from the August 1982 issue of 80-U.S. Journal

The LemonAid Loader was a device which greatly improved the ability of the TRS-80 to load programs using a CTR-80 or CTR-80A cassette recorder. It was designed by Wayne Lemons and sold through his company, Lemons Tech Services. The LemonAid Loader was available in two versions: the original which cost $12.99 (later $19.99) and a “deluxe” improved version which cost $18.99 (later $23.50). Both versions were compatible with the Model I and Model III, although cassette filtering was especially useful on the Model I.

The LemonAid Loader was described this way by a product announcement:

The LemonAid Loader, for the Model I, compresses, peaks, and shapes cassette output to reduce loading errors due to noise or tape variations, without critical CTR volume settings.

The loader plugs between the cassette recorder and the computer, and works on both self-saved and prerecorded tapes. It was especially developed for use with the Radio Shack CTR-80 and 80A tape recorders and like recorders. A speaker or earphone can be plugged in for audio monitoring of saves and loads also. 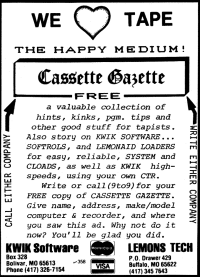 Advertisement from the April 1983 issue of 80 Micro

The LemonAid Loader was often paired with the line of high-speed cassette software sold by KWIK Software. Those programs, which included KWIKOS and KLOAD, provided speeds as high as 3000 baud on an unmodified Model I. Lemons Tech and KWIK Software sometimes shared magazine advertisements promoting their products and even offered a one-issue newsletter, the Cassette Gazette, which provided interesting facts about cassettes and described the products sold by the two companies.

Lemons Tech later introduced an updated loader named the Plum. The Plum, which cost $39.00 and was described as the “most sensitive loader,” offered features beyond the LemonAid Loader. These included the ability to work on all baud rates (including Model III 1500 baud), all cassette recorders (not just the CTR-80 and CTR-80A), and even on the Model 100 and the Color Computer.

Lemons Tech advertised both the LemonAid Loader and the Plum as late as 1984.