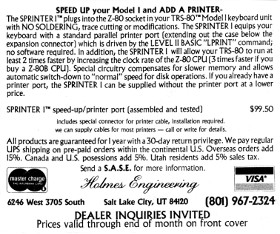 One unusual feature of the Sprinter I was that it included a parallel printer port. This port behaved the same as the printer port more commonly found in the Radio Shack Expansion Interface.

The Sprinter I could select eight different speeds, from 1.19 MHz (slower than Model I speed) to 5.32 MHz (three times Model I speed), with or without wait states. One nice feature of the Sprinter I was that it would automatically switch to a slower speed during disk and cassette access. This was important for compatibility with unmodified disk and cassette programs. There was an optional modification (described in the installation manual) to install a switch to enable or disable the disk slowdown or to disable it permanently by adding a resistor. This could be useful with some operating systems, such as NEWDOS/80, that could perform disk I/O at full speeds without needing a slowdown.

The speed most commonly used for the Sprinter I was 3.54 MHz. Running the Sprinter I at the fastest speed possible (5.32 MHz) meant that some additional modifications needed to be made to the Model I. The fastest speed required replacing the default Z80 with a faster Z80B processor (which had to be purchased separately). Running reliably at the fastest speed also required fast memory. Many Model I computers had 400 nanosecond memory installed, which was much too slow. Soldering pull-up resistors to the slower memory chips could sometimes solve the problem, but the better (and more expensive) alternative was to replace the chips with faster memory. Holmes Engineering recommended 150 nanosecond memory chips, which they sold for $26 per 16K.

Also, the later versions of the Radio Shack Expansion Interface that used an unbuffered cable needed to have one chip replaced when running at the fastest speed. Holmes Engineering sold the replacement chip for $10.

For any customers unwilling or unable to make those modifications to their Model I themselves, Holmes Engineering (for a nominal fee) guaranteed to make any Model I sent to them work reliably at 5.32 MHz.

The final version was the Sprinter III for the TRS-80 Model III. The Sprinter III was introduced in 1982 for a price of $99.50. It supported eight possible speeds, with a fastest speed of 5.07 MHz. The Sprinter III could also be installed in the Xerox 8202, a Z80 based CP/M computer.

The Sprinter III, like the Sprinter II, came with a Z80B processor installed. Installation required no soldering and the steps were essentially the same as the Sprinter II, except that there were only two colored wires to connect with solderless connectors (and one of those was optional). There was no Sprinter III printer port option because the Model III included a parallel printer port.

Operating at the fastest Sprinter III speed could require some additional modifications, although not as extensive as those needed for full speed on the Model I. In addition to needing fast memory, the Model III ROM chips sometimes required pull-up resistors to operate at full speed. Also, the resistor pack on the Model III keyboard sometimes needed to be replaced for reliable keyboard operation. For those who needed it, Holmes Engineering sold the necessary resistor pack.

Holmes Engineering advertised the Sprinter III and Sprinter II as late as 1984, and may have sold them later than that.