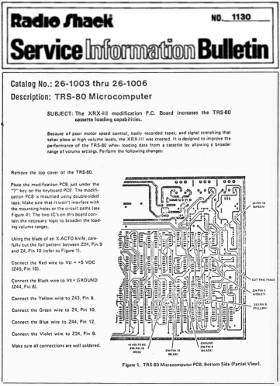 The XRX was made redundant by the introduction of version 1.3 of the Level II ROM, better known as the R/S L2 BASIC ROM. The version 1.3 ROM fixed in software what the XRX fixed in hardware.

The Model I was designed to save and load programs and data on cassette tape using only an inexpensive cassette recorder. The saving and loading process could work quite well when done with a good quality cassette recorder. But the loading process was often inordinately sensitive to volume levels. Most people found through trial and error that there was only one volume level that worked reliably. Making matters worse, cassettes produced by different software companies often required different volume levels, requiring another set of adjustments. Reading a Model I cassette could be a very frustrating process.

The reason for the overly sensitive volume control was actually a software error in the Model I Level II ROM. The ROM cassette reading routines worked by reading a clock pulse, waiting for a short delay, and then listening for a data pulse1. The mistake was that the cassette reading routines started listening for a pulse at the start of the delay, not at the end of the delay. This meant that any noise at all detected on the cassette during the delay would be counted as a data pulse. It became crucial to set the volume just high enough to detect a pulse, but low enough to prevent noise from being counted as a pulse. Depending on the cassette and the recorder, that precise volume level could be almost nonexistent.

The XRX modification from Radio Shack used a far simpler approach than the Data Dubber. It detected when the ROM had finished reading the clock pulse and then electronically blocked the cassette input until it was time for the data pulse. This made the volume setting less important and cassettes could be read with a range of volume levels. The XRX was essentially a hardware patch for a software bug.

The XRX board itself was fairly small, around 1 1/2" by 1 1/2", and consisted of five components with four wires. It was installed in the lower right side (under the ? key) of the Model I motherboard. Installation involved cutting one trace and soldering four wires.

The XRX solved most of the volume level problems and became a standard part of most Model I’s built after it was introduced. Here is an excerpt from “Important Information for Cassette Users” which announced the XRX modification:

A modification that helps cassette loads in Level II computers is available free to TRS-80 Level II owners. This modification makes the volume setting less critical so that variations in different tapes usually will not require volume readjustments.

The XRX was upgraded to the XRX-III2 in late 1979, which was described in Radio Shack Service Information Bulletin number 1130. The XRX-III was a slightly more reliable design that was less susceptible to speed variations. Installation of the XRX-III involved one trace cut and soldering six wires.

Because it enforced a specific set of cassette timings, the XRX conflicted with software and hardware which supported faster cassette speeds, such as the LemonAid loader from Lemons Tech and KWIK from KWIK Software. The Cassette Gazette newsletter from Lemons Tech included instructions to disable the XRX modification.

The cassette load modification for the keyboard is not needed with the new ROM and will not be installed.

The TRS-80 Model III and Color Computer, both introduced on July 31, 1980, could read and write cassettes, but never needed an XRX-style modification.