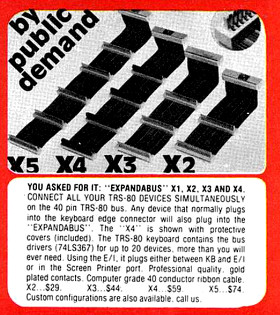 Portion of Alpha Products advertisement in 1983 issue of 80 Microcomputing

Not all hardware for the TRS-80 would work with the Expandabus. There were several potential problems:

But most TRS-80 devices did work. Not surprisingly, hardware sold by Alpha Products, such as the Alpha Joystick and the VS-100 Voice Synthesizer, worked fine with the Expandabus.

Unlike a somewhat similar device, the Radio Shack Multi-Pak Interface for the TRS-80 Color Computer, the devices plugged into the Expandabus weren’t switched but were all available to the TRS-80 at the same time.

To avoid any possible conflicts, most TRS-80 hard drive manufacturers recommended that the Expandabus not be used with their hard drives. I know of many people who used it anyway and never experienced any problems.

Alpha Products sold the Expandabus/Y-Cable as late as 1990.