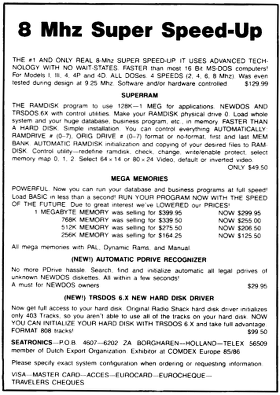 Seatronics advertisement from the March 1986 issue of 80 Micro

Once installed, the speed could be set (either through software or hardware) to 2 MHz, 4 MHz, 6 MHz, or 8 MHz.

The 8 MHz speed of the Super Speed-Up made it the fastest of the Model 4 speed-up boards. Most other commercial Model 4 speed-up options topped out at 6 MHz. (The one exception was the H.I. Tech, Inc. XLR8er. The XLR8er replaced the Model 4’s Z80 processor with the more advanced Hitachi HD64180. Even though the HD64180 ran at 6.144 MHz, its more advanced design meant that that speed was considered equivalent to an 8 MHz Z80.)

Seatronics hinted that the Super Speed-Up was capable of even faster speeds, mentioning in one advertisement that it had been tested at 9.25 MHz during development. I know that some people modified their Super Speed-Up boards to work at 12MHz. One person supposedly increased his speed to a staggering 16 MHz!1

Seatronics advertised the Super Speed-Up Board through 1986 and 1987, but it was no longer available by 1989.

If I am correct, Max Bosschaert developed this board in the 80’s for Seatronics. I remember assembling lots of them as a student in Utrecht the Netherlands. Max did made it to the US (Texas) to implement his developments during a short stay around ‘86.