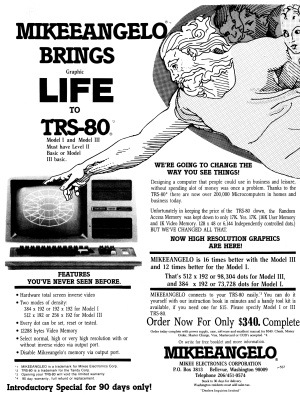 Mikee Electronics advertisement from the February 1982 issue of 80 Microcomputing

The Mikeegraphic Graphics System was a high-resolution graphics add-on for the TRS-80 Model I and Model III. It was sold by Mikee Electronics Corporation for $340. Originally known as the Mikeeangelo when it was introduced in late 1981, the name was changed to Mikeegraphic just a few months later to avoid confusion with another product (probably the SCION MicroAngelo graphics board for the S-100 bus).

Unlike the 80-GRAFIX, which provided high-resolution using a programmable character generator, the Mikeegraphic used a true bitmapped graphics screen. The high-resolution screen was mapped in its entirety at the top of the TRS-80 memory.

The Mikeegraphic consisted of two circuit boards, one which was mounted in the TRS-80 case and another which was housed in a separate unit. The separate unit, which had its own power supply, was connected by a cable to the TRS-80. Showing that some ideas are a bit different today, the Mikeegraphic advertisements promised “easy installation” requiring “only 18 solder connections and one trace/pin cut.” 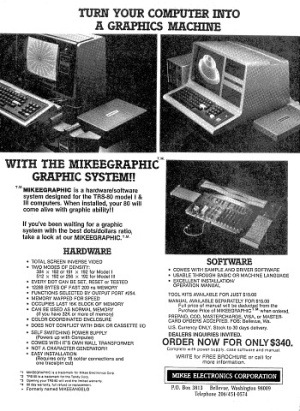 The Mikeegraphic came with 12K of its own video memory, so it didn’t steal any memory from the TRS-80. Static memory was expensive at the time, so that 12K probably accounted for the bulk of the $340 price. The extra memory allowed the Mikeegraphic to work on a 16K TRS-80 and not require an Expansion Interface on the Model I.

The Mikeegraphic was controlled by a single port and provided an simple option to mix the high-resolution and text screens. The high-resolution graphics were mapped to one contiguous memory space, which helped to simplify graphics programming.

The Mikeegraphic suffered from a problem common to many other TRS-80 peripherals: lack of software support. Other than the software supplied with it, the only Mikeegraphic-compatible program I know of was the High Resolution Command Module, usually known as RESCOM. Written by Bryan Mumford and sold through Mumford Micro Systems, RESCOM added high-resolution commands to BASIC.

Although the Mikeegraphic was a promising system, magazine advertisements for it disappeared by mid-1983. By that time, the Micro-Labs and Radio Shack boards had became the high-resolution standards.

Matthew – thanks for covering so much here.

I actually had one of these for the Model III. Unfortunately I gave it away with a lot of my TRS-80 gear in the late 90’s… something I’ve really regretted.

I got the box from a fellow at a local TRS-80 computer user’s group meeting. He installed it for us–and sold it to us in a trade.

I’ve often wished this device emulation could be added to one of the modern emulators. I think I spoke to Bryan Mumford once in the late 80’s… we must have had RESCOM — I remember getting his name and city (maybe his phone#) from the cassette that was with the hires adapter.

It would be nice if Mumford was still around has kept some of his code… perhaps the hardware could be reverse engineered.

OMG… I can not believe this exists!!!

Hey .. I’m the fool that tried to build and sale these. The name was change do to infringement. It was Mikeeangelo but Microangelo was talking law suit so it became Mikeegraphic.

If I had it all over to do again..

Think about that.. EVERY THING IS GRAPHICS BASED NOW!!!!

Lack of software was a serious issue.

There was one other app I wrote called “CharGen” that allowed creating custom characters. I also later had a print driver for the Epson MX-80 compatible printers tho this was near the time it died do to lack of sales.