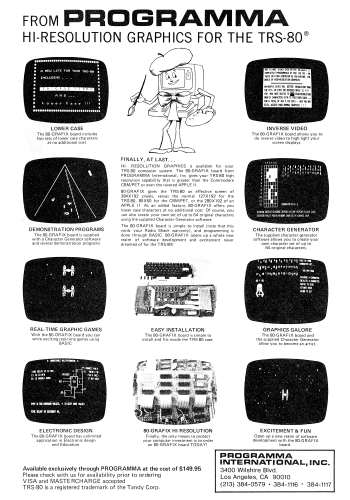 80-GRAFIX was one of several high-resolution add-ons available for the Model I. Designed by Ted Carter, it was originally sold “exclusively” by Programma International for $149.95. 80-GRAFIX fit entirely within the Model I case and required only minimal soldering.

The Programma advertisements stressed that 80-GRAFIX was “simple to install” and provided screen resolutions higher than the Commodore PET and the Apple II.  But 80-GRAFIX didn’t actually provide direct access to a bitmapped high-resolution screen. What it did provide was the ability to completely remap the upper 128 characters of the Model I character set.

Programs could use these remapped characters to create new character sets (Arabic and Hebrew were demonstrated), inverse video, graphic screens, or even animations. Programming 80-GRAFIX was fairly simple and could be done from BASIC. Programma also sold software for 80-GRAFIX. One notable example was HIRES80, a machine language tool written by Ralph Burris to help design new character sets. 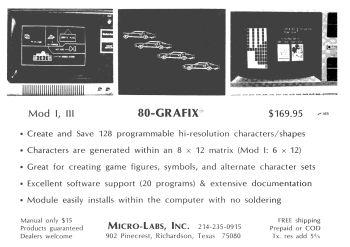 Micro-Labs advertisement from the September 1982 issue of 80 Micro

After Programma went out of business in 1982, Micro-Labs, Ted Carter’s company, took over support for 80-GRAFIX. In addition to new utilities and games, Micro-Labs also sold an updated version of 80-GRAFIX. Judging by the advertisements, there were three differences from the Programma version:

Micro-Labs continued to sell 80-GRAFIX until at least 1986.

An Australian-based company, Orcim Systems, produced a clone called the PCG-80 that extended the capability to 256 programmable characters whilst remaining software-compatible with the 80-Grafix.

My father had one installed in his Model I. There were a handful of games converted for it, mostly done by bedroom coders, including myself. I converted “Star Cresta” and “Jungle Raiders” – both games authored in Australia I believe.

I’ve just finished adding support for the PCG-80 to my TRS-80 Model I FPGA implementation. I was looking around for other Model I hires enhancements to add when I found 80-Grafix here – of course being backwards compatible I don’t need to do anything to support it!