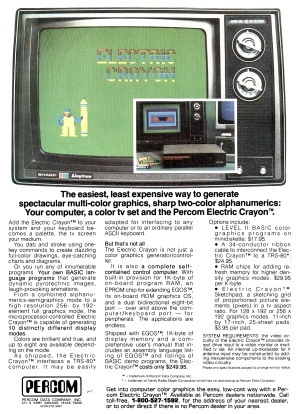 Percom advertisement from the April 1980 issue of 80 Microcomputing

Back in the late 1970’s, the Apple II and the TRS-80 Model I were competitors for computer sales. One advantage the Apple II had over the Model I was the ability to display color graphics. One of the first Model I products to address this deficiency was the Percom Electric Crayon. Percom introduced the Electric Crayon in December 1979 for a base price of $249.00. It was featured on the cover of the January 1981 issue of 80 Microcomputing.

The Electric Crayon was a small (12 inch wide by 9 inch deep) box which output a composite video signal that could drive either a monitor or a television set. It connected directly to the TRS-80 printer port and was controlled using EGOS, a ROM-based operating system. EGOS was directly programmed using single character commands. Virtually unique among TRS-80 color add-ons, the Electric Crayon did not use the TMS9918 graphics chip and did not support sprites.

The maximum resolution was 256 by 192 and eight colors were possible: green, yellow, blue, red, buff, cyan, magenta, and orange. But only four colors were allowed at the higher resolutions and only two at the highest resolution. In semigraphics modes, a built-in character generator helped with displaying text.

The Electric Crayon was quite an impressive peripheral. Harold Mauch, the president of Percom, described it as “a complete, self-contained control computer with provision for 1K-byte of on-board program RAM, an EPROM chip for extending EGOS and a second dual bidirectional 8-bit port – over and above the dual I/O computer port – for peripherals.” But most of that promise remained untapped. Percom sold a few programs for the Electric Crayon but the software and games that might have taken full advantage of its features were never written.

I had one of the Percom Electric Crayon 6K units attached to my TRS-80 Model I back in the early 1980s. It cost a total of $310. While I was working on my CS degree, I used it to test out my graphics algorithms in (relatively) hi-res color before porting my code over to the university’s Apple II system where the projects had to be demonstrated. I also used the Crayon when I was giving talks – essentially presenting “PowerPoint-esque” slides on a large color monitor, before PowerPoint was a thing.

I wish I had hung onto it, but ended up donating everything in 1985 to make room for a new generation of gear. Now that I have room for both new and old, I’m pining for it again. If anyone has a pointer to the manual, I would be interested in revisiting the EGOS commands.