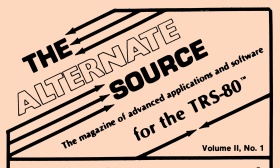 The Alternate Source, also known as The Alternate Source Programmer’s Journal or TAS, was a well-remembered and very technical TRS-80 publication. Later billed as “The magazine of advanced applications and software for the TRS-80,” the first issue was published by Joni Kosloski and Charley Butler in January 1980. It was published once every two months for a total of six issues a year. 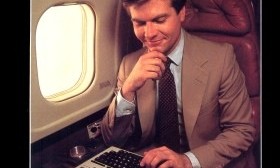 Computer User was a short-lived TRS-80 magazine created by the publishers of Interface Age, a popular computer magazine that began in 1976.

Unlike many other TRS-80 magazines, Computer User was a professional, glossy publication from its first issue in November 1983. It was heavily promoted, with promotional copies of the premiere issue sent to subscribers of competing magazines. 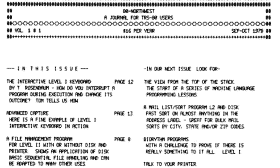 80-Northwest Journal (sometimes called 80-NW Journal) was first published in 1978 with the September/October issue. The founder of the magazine, Irvin “Mike” Schmidt, described the reason behind the new publication in the first issue: 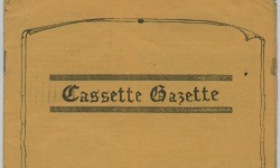 Back in 1983, Lemons Tech and KWIK Software advertised a one issue joint newsletter named the Cassette Gazette. The Cassette Gazette described the products sold by the two companies, mixed with operational advice and interesting facts about using cassettes with the TRS-80. It appears to have been written by Wayne Lemons, the founder of Lemons Tech. I received my copy back in 1983, and it has always been a favorite of mine.

“The Next Step” was a popular column written by Hardin Brothers that began in the February 1983 issue of 80 Micro. Originally conceived as a five part column about integrating BASIC and assembly language, “The Next Step” went on to become one of the longest running columns in the magazine.

The focus of “The Next Step” was programming the TRS-80 in assembly language. It covered the Model I and Model III at first, but had largely switched to the Model 4 by 1984. The name was a reference to assembly language as being the next step beyond BASIC, as was stated in the first column: 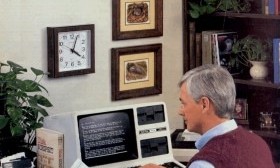 The TRS-80 Microcomputer News was Radio Shack’s own official publication supporting the TRS-80, sent for free to anyone who bought a TRS-80 computer. The motto described it as “The microcomputer newsletter published for TRS-80 owners”.

Originally called the Radio Shack Microcomputer Newsletter, the first issue, published in 1977, was four pages long. It was published irregularly after that (two issues in 1978 and seven in 1979) until it changed to a monthly publication schedule with the October 1979 issue. It remained monthly from then on, with the exception of three combined issues in 1980 and 1982. The name changed to the TRS-80 Microcomputer News with the March/April 1980 issue. 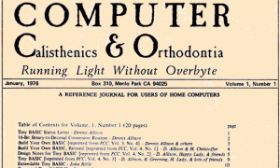 Dr. Dobb’s Journal was one of the longest running microcomputer magazines, lasting 33 years in print form. It was first published in January 1976 as Dr. Dobb’s Journal of Computer Calisthenics & Orthodontia with the subtitle “Running Light Without Overbyte”. The title of the magazine was eventually shortened to Dr. Dobb’s Journal.

The name “Dr. Dobb” didn’t refer to a real person but was created by combining the first names of Bob Albrecht and Dennis Allison, the founders of the magazine. The magazine was originally created to promote the concept of Tiny BASIC, a small but powerful BASIC interpreter that could be used on the new microcomputers such as the Altair. 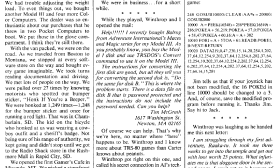 “The Gamer’s Cafe” was a column about TRS-80 gaming which ran in 80 Micro magazine. It first appeared in the November 1982 issue near the height of the TRS-80 game market and ran until April 1984. “The Gamer’s Cafe” had some similarities to “Captain 80,” a column written by Bob Liddil that premiered in the first issue of 80 Microcomputing in 1980 and later appeared in 80-U.S. Journal.

With only a few exceptions, “The Gamer’s Cafe” was written by the fictional character of Rodney Gambicus. The column started when Rodney and his friend Winthrop Luzerdraw decided to travel the country in a Ford Econoline van. They filled the van with TRS-80 computers and games, including multiple Model I’s, Model III’s, Color Computers, and two Pocket Computers that the Radio Shack dealer threw in as part of the deal. They also had a PMC-80 which they described as a “PMC ½.” Their plan was to stop at various locations around the country, put out tables, and let people play TRS-80 games, literally a “Gamer’s Cafe.” 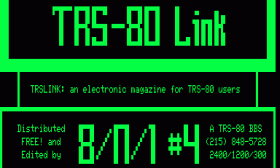 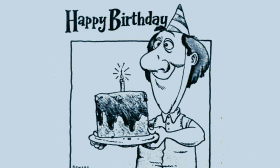