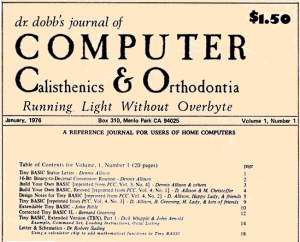 Cover of the first issue of Dr. Dobb’s Journal in 1976

Dr. Dobb’s Journal was one of the longest running microcomputer magazines, lasting 33 years in print form. It was first published in January 1976 as Dr. Dobb’s Journal of Computer Calisthenics & Orthodontia with the subtitle “Running Light Without Overbyte.” The title of the magazine was eventually shortened to Dr. Dobb’s Journal.

The name “Dr. Dobb” didn’t refer to a real person but was a combination of the first names of Bob Albrecht and Dennis Allison, the founders of the magazine. Dr. Dobb’s Journal was originally created to promote Tiny BASIC, a small but powerful BASIC interpreter that could be used on the new microcomputers such as the Altair.

But in a short time, the magazine expanded beyond Tiny BASIC. An advertisement from 1978 described its focus (italics preserved): 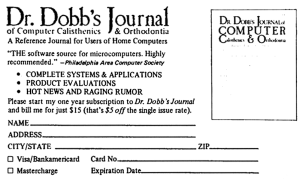 Dr. Dobb’s Journal of Tiny BASIC Calisthenics & Orthodontia was the birthplace of Tiny BASIC. Since then it has been the source of public domain systems and applications software. The only small computer magazine to publish complete documented source code for microcomputer operating systems and compilers.

Get the very most out of your system by studying the extensive software – including fascinating new languages like LISP – presented in its entirety ready for you to get up and running on your machine.

We keep abreast of what is happening in this fast-moving field and share that information with you. You’ll read about new developments, breakthroughs on the leading edge of computer technology, and flights of realizable fancy. That’s not to mention all the product announcements, tidbits, rumors and plain gossip.

We started out by looking at the Li-Chen Wang BASIC. It’s in the public domain. Of course, it’s integer. What we did, we went back through the Wang BASIC and completely tore out about 60 percent of it, the integer overhead and all that kind of stuff. It’s got a full floating-point package in it now, add, subtract, multiply, and divide.

In the late 1970’s and early 1980’s, Dr. Dobb’s Journal published many articles about the TRS-80 and reviews of TRS-80 products. The magazine continued publication until 2009, although the focus changed to professional programming in its final years.