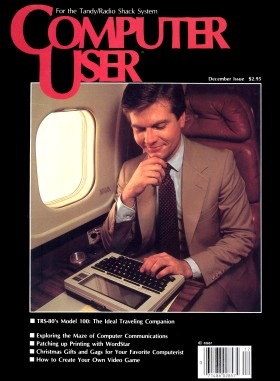 Computer User1 was a short-lived TRS-80 magazine created by the publishers of Interface Age, a popular computer magazine that began in 1976.

Unlike many other TRS-80 magazines, Computer User was a professional, glossy publication from its first issue in November 1983. It was heavily promoted, with promotional copies of the premiere issue sent to subscribers of competing magazines.

Computer User was clearly aimed as competition to 80 Micro, the leading TRS-80 magazine at the time, and the dissatisfaction many felt with the changes made to the magazine. Robert S. Jones, the publisher of Computer User and Interface Age, wrote in the premier issue:

We believe the computer industry has been lacking a publication that effectively caters to the needs of you, the TRS-80 user, and many prominent people in the industry obviously agree. As you get to know Computer User, you’ll probably recognize several internationally known authors of popular TRS-80 books.

We’re all working together to bring you a monthly publication that will help you maximize the potential of your TRS-80 computer—regardless of the particular model you own or your specific application. We have tailored Computer User to serve TRS-80 users with every level of experience; whether you’re a newcomer to computing or a veteran hacker, we’re committed to helping you answer questions, solve problems, and learn new, exciting ways to improve your capabilities as a computer user.

Computer User covered all of the TRS-80 models and tried to appeal to a broad range of users. There was obviously great effort made to attract interesting people and articles to the magazine. Among the contributing editors were William Barden, Jr. (who wrote a column “Assembly Hall”), Lewis Rosenfelder (who wrote a column “Faster and Better BASIC”), and David Busch. Other authors featured included Hardin Brothers and Harvard Pennington.

One unique service offered by Computer User was the Program On-Line Data Exchange or PODE. PODE was an information service that let readers download all of the program listings from the magazine, as well as offering message boards (called “databases”) and “Electronic Mail” between users. PODE required a separate subscription fee, but charter subscribers to Computer User were offered one year of access for free.

In retrospect, Computer User was probably started at the worst possible time for a TRS-80 magazine. The TRS-80 market was beginning to decline as the IBM PC, the Apple II, and the Commodore 64 began their domination of the personal computer market. The number of TRS-80 companies (and potential advertisers for a magazine) declined correspondingly. The premiere issue of Computer User was 192 color pages with over 100 advertisers. But a readership of 316,000 was expected, a staggering figure when you consider that 80 Micro had around 120,000 readers at the time. Many advertisers dropped out and the July/August 1984 issue, which was probably the final one, was 44 pages long.

I was the art director for the magazine when it first launched. Bob Jones made an agreement with Tandy Radioshack to get a customer mailing list. That’s where the 316,000 readership number came from. As I recall the plan was to send out the first few issues for free, but the plan ran into snags right away when it was discovered after mailing that much of the list was old and inaccurate. Many, many issues were returned by the post office. The financial burden eventually led to the demise of both Computer User and Interface Age.