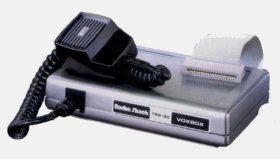 The TRS-80 VOXBOX (catalog number 26-1181) was an early microcomputer speech-recognition product for the TRS-80 Model I. Introduced in July 1979 by Radio Shack for a price of $169.95, the VOXBOX was described as “electronic ears for your Model I.” The VOXBOX was only available for the Model I; there never was a version for the Model III.

Here is a description of the VOXBOX from a 1980 Radio Shack catalog, where it was paired with the $399 TRS-80 Voice Synthesizer:

Experiment with “voice recognition” on your TRS-80. That’s right, speak into a microphone attached to the VOXBOX and you can program your TRS-80 to respond to your spoken words.

Computer voice recognition is a new field and not fully developed, but here’s your chance to experiment with this exciting new technology.

The TRS-80 VOXBOX was equipped with a push-to-talk microphone with coiled cord that looked suspiciously like a CB handset (Radio Shack was a major CB retailer). The VOXBOX itself connected to the card-edge connector on either the Model I or the Expansion Interface.

The VOXBOX software, included on a cassette, provided a driver that could be called from BASIC. The VOXBOX driver used three sets of routines: initialization, training, and recognition. After the VOXBOX driver was “trained” by a user, it could recognize up to 32 words or phrases, each up to 1.2 seconds long with .1 seconds of silence in between. The manual described it as a “speaker-trained, isolated-word, speech recognition system with a 32-word vocabulary.”

Also on the cassette (with listings printed in the manual) were three demonstration programs:

The VOXBOX manual was honest about the limitations of the speech recognition technology, suggesting that with careful use a recognition rate of 85 to 95% was possible. It cautioned:

Computer Speech Recognition is still in its early stages. You cannot, for example, expect the VOXBOX to understand you unless you make every effort to make yourself understood. Put another way, it is easy to fool the VOXBOX; the goal is to communicate with your Computer through it.

The manual included one other caveat:

Speech recognition is a new technology. In fact, your Radio Shack VOXBOX is one of the first such devices to be both available and affordable to general consumers. For this reason, Radio Shack recommends that the unit be used primarily for entertainment and experimentation. Proceed advisedly before committing the unit to any serious application.

The TRS-80 VOXBOX did have at least one other application: J. Weaver Jr., the author of the TRS-80 games Outhouse, Chicken, Rally, Vexus, Planetbuster, Yield, and Pulsar, used the VOXBOX and custom software to encode the voice samples he used in his games.

Other than a $119 sale for readers of the TRS-80 Microcomputer News, the TRS-80 VOXBOX remained at the $169.95 price until it disappeared from the Radio Shack catalogs in 1982.