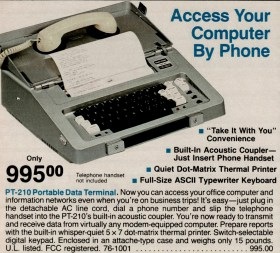 The TRS-80 PT-210 Portable Terminal (catalog number 76-1001) was a mobile dumb terminal that provided a way for travelers to access remote computers while on the road. Introduced by Radio Shack in late 1982 for a price of $995.00, the PT-210 was promoted with the slogan “Now there’s a TRS-80 you can take with you on business trips!”

Now you can access a computer from anywhere in the country by phone with Radio Shack’s new PT-210 Portable Terminal. It couldn’t be easier to use. Just slip in the detachable AC line cord, dial a phone number and slip the telephone handset into the PT-210’s built-in acoustic coupler—micro, mini, or mainframe!

The PT-210 was supposedly quite popular with IRS agents and business travelers, but its appeal was obviously limited. Radio Shack reduced the price of the PT-210 to $795.00 for their 1984 catalog, but it disappeared from the catalog after that.

What a good article. I used one of those extensively though I had forgot the name. I’ll always remember that thermal paper. I was on the road for months at a time but could communicate with the office at a blazing 300 baud. It seemed really advanced at the time. I guess it was kind of a preview of the future.

I carried one of these around in the late 80s. The model I had also had a battery, upping the weight to about 20 pounds. I would sometimes use it in a phone booth and got a lot of curious looks from passers by.

I still have my original PT-210 and original TRS-80 Mod III. When I was a distribution center manager for a global company back in the early 80’s, I put the PT-210 on my secretary’s desk and she used it daily to update my TRS-80 mod III at home with my DC’s daily operational statistics. Then at month-end I would simply run my monthly operational reports at home to send to my boss and HQ. It reduced a 3 day manual job for me down to a couple hours a month. HQ IT had no idea what was going on. :)