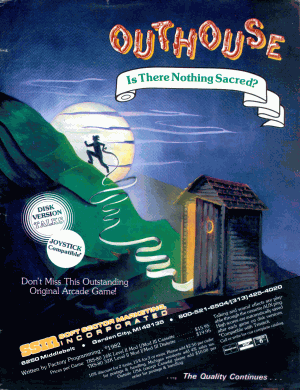 An advertisement from 80-U.S. Journal

You are in charge of a spaceship (which looks like a Big Five Software Flagship) which is assigned to protect an isolated outhouse. For some strange reason, alien spaceship are targeting the structure for destruction. Equally troubling are the thieves and squatters who are attempting to steal all of the paper from the outhouse. Thieves try to use up the paper by dragging a trail from the outhouse. Squatters merely go into the outhouse and use up a certain amount of paper. The game ends if you lose all of your lives or if you run out of paper. You receive an extra life and smart bomb every 10,000 points and an extra roll of paper after four waves of aliens. 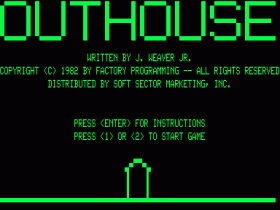 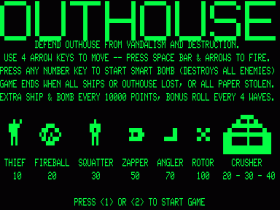 Your ship fires a laser bolt that can destroy aliens, thieves, and squatters. The bolt doesn’t recharge immediately, so you can fire only about one shot per second. Your ship will be destroyed if you crash it into anything, even the outhouse itself. You also have a limited number of smart bombs at your disposal that can destroy all enemies on screen. The game sounds simple, but it can be extremely difficult, especially when there are many aliens and vandals on screen. 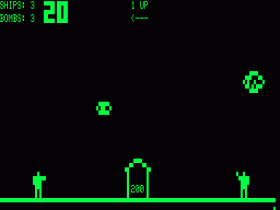 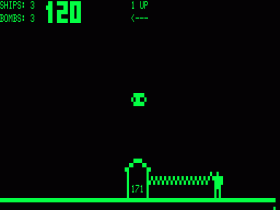 Outhouse is a creative idea for a game, and certainly not a typical arcade game.

I remember this game as a kid – was one of the most fun ones I had!

This was definitely one of the ‘classic’ arcade games for the TRS-80, up there with the likes of Big Five Software games. Very polished, fun to play with a good difficulty curve. One of my favourites too!