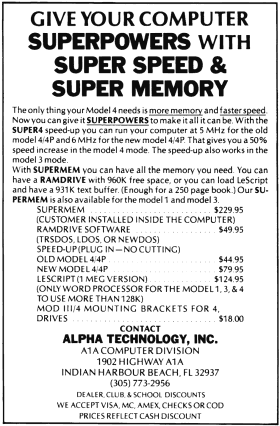 Alpha Technology advertisement from the November 1985 issue of 80 Micro

The Alpha Technology Supermem was one of the most popular memory expansion options for the TRS-80. Alpha Technology (not to be confused with the similarly named Alpha Products) introduced the Supermem in 1985 for the Model I, Model III, and Model 4 in four memory sizes:

There were also two memory sizes unique to the Model III:

Those memory sizes were quite competitive with other computers available at the time.

The Supermem itself was a small circuit board that plugged into the Z80 socket. Installation required some soldering and clipping of resistors, although Alpha Technology estimated the process to take less than an hour.

TRSDOS 6, the Model 4 operating system, was always designed to support extra memory beyond the 128K possible with a stock Model 4. Roy Soltoff, the designer of Model 4 TRSDOS, developed patches to extend the memory selection scheme to work with the Alpha Technology Supermem. These patches became known as the “AT” patches. Any properly designed Model 4 program, such as DoubleDuty, PRO-WAM, or Scripsit Pro, would automatically use the extra memory after applying the “AT” patches.

There was no provision for extra memory in the Model I and III operating systems. Any Model I and III programs had to be modified before they could take advantage of the Supermem memory. The best example of a program that made good use of the Supermem was the word processor LeScript, sold by Anitek Software Products. LeScript provided full support for the Supermem and allowed creating documents as large as available memory.

Around 1988, Anitek Software Products took over distribution of the Supermem. Anitek later introduced their own memory expansion options, the Hypermem and the MegaMem. The MegaMem provided memory expansion as high as 16MB without soldering.

Great article! I always thought that the two Alpha companies were the same because I hadn’t stopped and actually had clear in my head the names. That is, in the back of my mind I thought the TRSSTICK and the memory kit was by the same company. Good history.

Is it possible to still install a Megamem kit? Does it use SIP or chip memory?

Wow, imagine my surprise when I happened to find this article out there on the internet. My name is Rob Taylor, and I was the designer of the Alpha Tech. SuperMem module. I was part owner in A1A Computers back in that time frame. We also designed a CPU Speed PAL chip to increase the speed of the Z80 CPU for one of the faster CPU revisions. Its amazing how you can find bits of your history strewed across the internet. Thanks for the bit of Nostalgia.