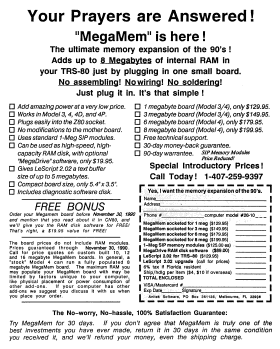 Anitek advertisement from the November 1990 issue of Computer News 80

The MegaMem itself was a small board that measured 5.4" by 3.5". Installation involved only five steps:

The MegaMem came in three versions for the Model III and 4:

There were also two versions for the Model 4/4P only:

Those prices were for empty boards and didn’t include the necessary SIP memory modules. At the time the MegaMem was introduced, 1MB of memory cost $125. A volatile memory market meant that the same 1MB had dropped to $89 by the end of the year.

Anitek also offered “custom-built” 10MB, 12MB, and 16MB versions for the Model 4 only (not Model 4P). Due to the power consumed by the extra memory chips, the 16MB version usually required upgrading the Model 4 power supply.

To allow for future expansion, a MegaMem could operate with its memory slots only partially filled. For example, this meant that a user could buy an 8MB MegaMem containing only 1MB of memory and increase the memory as need (and budget) dictated.

Anitek also sold a $19.95 RAM disk program named MegaDrive that could use the MegaMem memory. MegaDrive worked on both LDOS and LS-DOS and was sometimes bundled by Anitek with the MegaMem. Another program that could use the extra MegaMem memory was BCX, a spreadsheet program written by David Goben. BCX supported the Supermem, HyperMem, and MegaMem.

But the most common use for the MegaMem memory was with LeScript, the word processing system sold by Anitek. LeScript 2.0 or later could use the MegaMem memory to create a text buffer as large as 5MB and also to cache its dictionary and related files.

Anitek disappeared from the TRS-80 market around late 1991. The MegaMem was no longer available but remained a highly sought after item by TRS-80 owners for several years. As it turned out, PC compatibles only briefly used SIP modules: persistent problems with damaged pins led to SIMM’s (single in-line memory module) completely replacing them soon after.