DoubleDuty is a utility that uses the full 128K of a TRS-80 Model 4 to allow more than one program to be run at one time. Introduced by Radio Shack in 1984, DoubleDuty was written by Randy Cook, the author of Model I TRSDOS and VTOS. 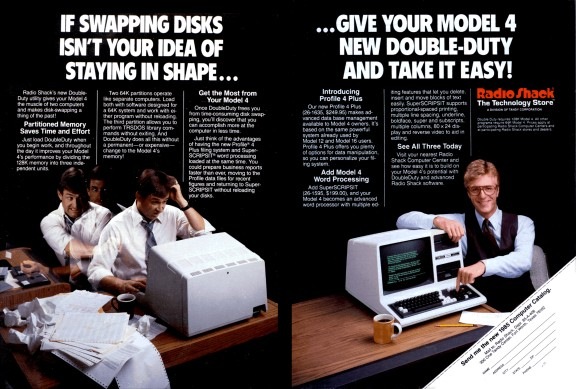 DoubleDuty works by creating three sections, called partitions, out of the Model 4 memory. Partitions one and two each contain a complete Model 4 TRSDOS system. The third partition is reserved for running TRSDOS library commands. 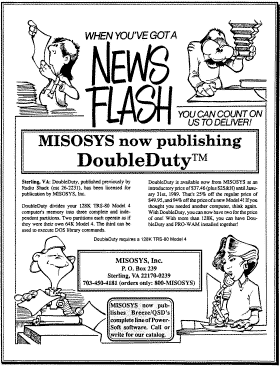 MISOSYS advertisement from the February 1990 issue of Computer News 80

Because partitions one and two exist independently, a different program can be run in each partition. For example, you can run TMaker in partition one and Scripsit Pro in partition two. Both programs operate independently and are unaware that any other program is running. Switching between partitions is possible using special key combinations:

In 1989, Roy Soltoff of MISOSYS released a updated version of DoubleDuty. The new version could use not just the 128K of memory of an unmodified Model 4, but also additional memory provided by Model 4 memory addons, such as the XLR8er, the Alpha Technology Supermem, and the Anitek Megamem.