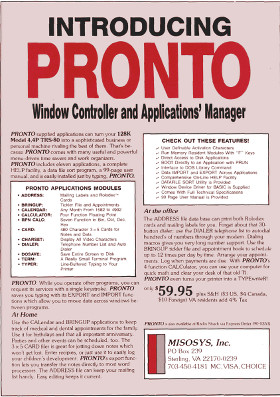 PRO-WAM was described in advertisements as a “Window Controller and Applications Manager.” It was inspired by the Borland program Sidekick, a terminate and stay resident personal information manager that was very popular at the time on the IBM PC.1 (PRO-WAM was also similar to Monte’s Window, written by Jim Stutsman, which was only available for Montezuma Micro CP/M.) Like Sidekick, PRO-WAM provided a set of simple, but useful, tools that could be popped up over a running program.

PRO-WAM could be activated at any time by pressing the CONTROL and P keys together. (That key combination could be easily changed.) After starting PRO-WAM, a user could launch any PRO-WAM application from a menu or by typing in the name. The applications included with PRO-WAM were:

Pronto from the Chemical Bank

PRO-WAM was originally named PRO-NTO when it was introduced in 1984 and used that name until 1986. In February 1986, MISOSYS received a complaint that PRO-NTO name infringed upon Chemical Bank’s trademark for their Pronto electronic banking service. Although it is hard to see much chance for confusion, MISOSYS changed the name of PRO-NTO to PRO-WAM in mid-1986.2 PRO-WAM, which stood for Window and Application Manager, became the much better known of the two names.

In fall of 1986, MISOSYS introduced an enhancement package for PRO-WAM called Mister ED. Mister ED cost $59.95 and added seven new PRO-WAM applications with the five main ones focused on editing:

I always found the Mister ED tools, FED and MED in particular, to be very useful when programming.

In Spring 1987, MISOSYS released PRO-WAM version 2. It was a major enhancement, adding full support for the extra memory provided by Model 4 memory expansion boards such as the XLR8er and the Alpha Technology Supermem, among many other features. It also added:

Because PRO-WAM was designed within the guidelines of Model 4 TRSDOS, it was compatible with almost all LS-DOS/TRSDOS 6 programs. Even applications such as DoubleDuty, which used extra memory to create two Model 4 environments, worked fine with PRO-WAM as long as the Model 4 had a third-party memory expansion large enough to accomodate both programs.

There were only a handful of applications that didn’t work properly with PRO-WAM. The main offenders were the word processors LeScript and SuperScripsit, which used their own keyboard routines and didn’t allow pasting from PRO-WAM. The SuperScripsit export problem was fixed by a clever filter written by Lynn R. Sherman in an article published in the Winter 1988 issue of The MISOSYS Quarterly.

PRO-WAM, along with almost all the remaining MISOSYS TRS-80 products, was discontinued after a closeout sale that ended on June 15, 1993.