The XLR8er (pronounced accelerator) was a speed-up and memory expansion board for the TRS-80 Model 4, regarded by many to be the ultimate Model 4 expansion. The XLR8er replaced the Model 4 Z80 CPU with an enhanced microprocessor that offered 256K of additional memory (for a total of 384K) and up to double the speed. The XLR8er originally sold for $299.95 (with memory) when H.I. Tech, Inc. introduced it around 1986, but that price soon dropped to $249.95. 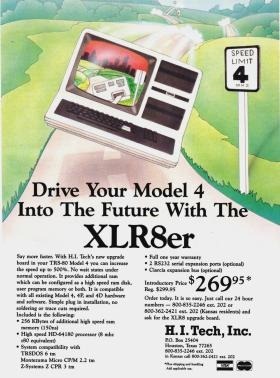 H.I. Tech advertisement from the January 1987 issue of 80 Micro

The XLR8er hardware was based on the SB-180 single-board computer project that was presented by Steve Ciarcia in the September and October issues of BYTE and sold by MicroMint. The XLR8er was close enough to the SB-180 design that it was able to accept “Ciarcia” expansion modules designed for the SB-180.

The microprocessor used by the XLR8er was the Hitachi HD64180. The HD64180 was Z80-compatible and could run existing Z80 programs, but it also was faster (6.144 MHz), had new instructions, supported extra memory, and had other additional features such as internal timers and extra RS-232 ports.

Installing the XLR8er involved unplugging the Z80 processor and plugging a cable from the XLR8er board into the empty socket. No soldering or trace cutting was required.

The XLR8er could be installed across the entire Model 4 line, although the mounting details varied slightly depending on the model. Usually (but not always) the Model 4 built-in memory needed to be replaced with faster memory. The only other common problem was that some Model 4’s required that a chip used by the keyboard be replaced with a faster version.

Among operating systems, LS-DOS, LDOS, MULTIDOS, and Montezuma Micro CP/M all had specific support for the XLR8er and its features. H.I. Tech supplied two utilities, FIXBANK and FIXALL, to implement XLR8er support in Model 4 LS-DOS.

In January 1988, Michel Houdé developed a set of patches to Model 4 LS-DOS that integrated XLR8er support right into the operating system. These patches, published in the Fall 1988 issue of The MISOSYS Quarterly, eliminated the need for both FIXBANK and FIXALL. These patches, or variants thereof, were reworked and further developed by David Goben, Frank Slinkman, Mel Patrick, and Mark Reed.

The XLR8er compatibility was excellent, with almost all Model III and Model 4 software supported. There were two minor areas of incompatibility: undocumented instructions and joystick support.

The Hitachi HD64180 supported all documented Z80 opcodes. However, most Z80 processors also recognized a range of undocumented (and unsupported) instructions. Very few TRS-80 programs used those undocumented instructions, but there were a handful of programs (most notably TRSDOS 1.3) that needed to be patched before they would work with the XLR8er.

Another problem was caused by a very slight difference in the way the Z80 and the HD64180 handled port access. This quirk meant that some TRS-80 games could no longer use the Alpha Products joystick or Big Five Software TRISSTICK when run with the XLR8er. Most of those games were no longer being sold at the time, but users created patches to fix the games that required it.

MISOSYS took over distribution of the XLR8er in late 1987 and dropped the price to $175.00 without memory and $245.00 with memory. (The “with memory” price varied as memory prices fluctuated.)

MISOSYS sold the final XLR8er units in 1992 for $100 without memory. They are quite rare today.