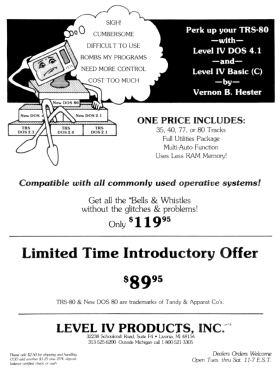 First ULTRADOS advertisement from the October 1980 issue of 80 Microcomputing

ULTRADOS was the first TRS-80 operating system written by Vernon Hester. Introduced in September 1980, ULTRADOS was sold by Level IV Products, a software and hardware retailer based in Michigan. The regular price for ULTRADOS was $119.95 but the introductory price of $89.95 lasted for several months. ULTRADOS was for the Model I only; there never was a Model III version.

Originally called Level IV DOS, ULTRADOS began life as a heavily patched version of Model I TRSDOS. However, Vernon Hester made so many modifications that ULTRADOS bore little resemblance to TRSDOS. ULTRADOS was a very stable operating system with the bugs of TRSDOS corrected.

Vernon Hester was already well known for his BOSS debugger for BASIC, which was also sold by Level IV Products. ULTRADOS included a number of programming utilities and chief among them was SUPER BASIC.

SUPER BASIC was a heavily enhanced version of BASIC also written by Vernon Hester. It was an incredible example of tight programming. Paul Wiener had this to say in his “Notes From Beneath the Keyboard” column in 80 Microcomputing:

Hester’s thing is compression. He jams so much programming into so few bytes you might suspect the RAM chips were put through a compacter.

SUPER BASIC was a prime example of this ability. Even with all of its extra features, SUPER BASIC provided 2K to 3K more free memory than competing BASIC’s. 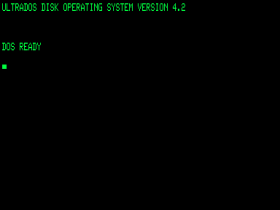 ULTRADOS — The most powerful system available for the S-80’s, includes a complete utilities package. Ask for an overview.

There was no comparison to other operating systems, no features list, not even a list of the utilities included with the package. Despite this, Level IV Products sold over 2,000 copies of ULTRADOS version 4.1.

Version 4.2 of ULTRADOS was released in mid-1981. The advertisements described it only as “Faster and even more powerful than before.” The price for ULTRADOS was reduced to $94.95, and a new version which didn’t include the programming utilities was offered for $59.95.