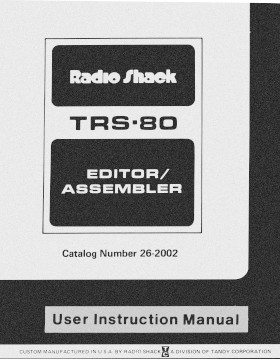 The TRS-80 Editor/Assembler (catalog number 26-2002), better known as EDTASM, was an assembly language programming tool for the cassette TRS-80 Model I. It was introduced in 1978 and cost $29.95. EDTASM was such a common tool that its name (and associated file format) became a generic term for TRS-80 assembler1.

Like the T-BUG debugger that it was frequently paired with, EDTASM worked on Model I computers with either Level I and Level II BASIC. It managed this by including two cassettes in the package. One contained the EDTASM program and could be loaded directly into Level II BASIC. The other was a cassette named “SYSTEM” that contained a short Level I program that could load the EDTASM cassette itself. EDTASM did require 16K, which was a fairly unusual Level I configuration.

In brief the Editor/Assembler is designed for a user to type in source assembler code. The source code is assembled and the resulting object code may be recorded onto tape.

One of the best features of EDTASM was its manual. In addition to an overview of the EDTASM program, it also included the complete documentation for the Zilog Z80 processor used in the Model I.

Radio Shack never offered a disk version of the original EDTASM. They did sell the unrelated Disk Editor/Assembler (catalog number 26-2202) for $99.95. Although its name would suggest that it was a disk version of cassette EDTASM, it was actually a TRS-80 version of Microsoft’s M80 macro assembler package.

The name EDTASM was used by several other programs for the TRS-80: 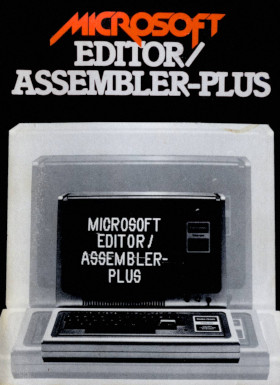 Cover of the EDTASM-PLUS manual

The Series 1 Editor/Assembler was an upgrade to EDTASM, described in the manual as being “derived from original Tape Editor/Assembler.” But its filename remained EDTASM and I suspect many people using it never realized they weren’t using the original EDTASM.