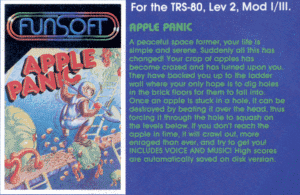 From an advertisement in 80 Micro

Apple Panic was based on the arcade game Space Panic which was released by Universal in 1980. The original version was written for the Apple II by Ben Serki1 in 1981 and sold by Brøderbund Software. There were also versions of Apple Panic sold for the Atari 400/800 and the IBM PC (both written by Olaf Lubeck) and for the Commodore VIC-20 (by Creative Software). The TRS-80 version was written by Yves Lempereur in 1982 and published by Funsoft, the fifth of nine games that Yves Lempereur wrote for the TRS-80.

The game takes place on a screen of platforms and ladders. For some strange reason, the apples have begun rampaging against you, an apple farmer. The apples constantly roam the screen, even travelling up and down the ladders. If an apple touches you, then you immediately lose your life. 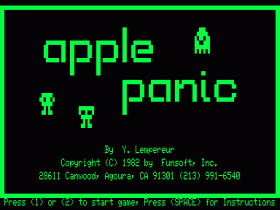 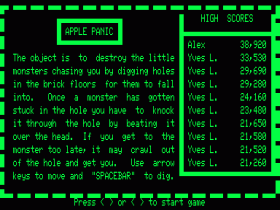 You need to avoid the apples by using the ladders to move to different platforms. You are armed solely with a shovel and your only hope is to try to dig holes to stop the apples. If you dig a hole and an apple falls in, then it will be briefly immobilized. You then need to jump up and down on the apple to push it through and destroy it. If you don’t do that soon enough, then the apple will fill in the hole and continue on its way. There is also a time limit; you lose your life if you don’t destroy all the apples within the allotted time.

The keyboard controls are simple, but appropriate. You use the arrow keys to move and SPACEBAR to dig a hole and also to jump on an apple. Apple Panic can also be controlled using TRS-80 joysticks such as the TRISSTICK.

Apple Panic makes very good use of music and sound. The music played when completing a level is especially well done. The game also makes a brief use of digitized speech: the one phrase “Apple Panic” is spoken at the title screen. 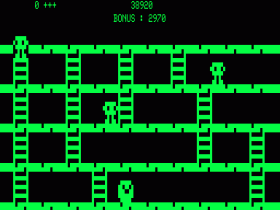 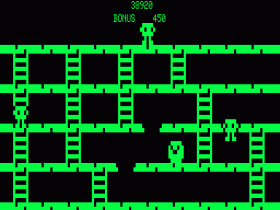 One apple is captured

The Funsoft logo screen and the animated title screen are impressive and are among the best examples of animated transitions in any TRS-80 game. Apple Panic remains one of my favorite TRS-80 games.

I had played Apple Panic along long time back …in 1983. There was colour in the game where a match stick man had to climb a few ladders and dig holes for the monsters to fall in…I cant find this version. i have looked for a great number of years.

You’re probably thinking of the original version for the Apple II.

It was also ported to a number of other platforms of the era.

I remember this game from another publisher: Micro2000 rather than Funsoft. How does this relate to the history? Which was first, or did both exist at the same time?

I’ve also seen the Micro 2000 branded version of Apple Panic. It has the same copyright date as the Funsoft version, suggesting that they were both released at the same time. My guess would be that Micro 2000 (which also sold two other non-Funsoft Yves Lempereur games) had rights to the game in Europe.