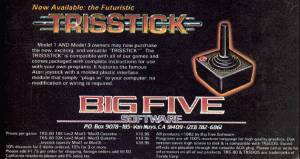 The solution was to use a discrete bit for the fire button. Big Five Software created the TRISSTICK, their own Atari joystick interface which used bit 4 for the FIRE button. For those who already had the STICK-80, the instructions for Robot Attack contain very detailed instructions about how to modify the joystick’s FIRE button to work with Robot Attack. You don’t normally find instructions for trace cutting and soldering in game documentation!

The TRISSTICK became very popular, and it was a rare TRS-80 game that was not modified to work with either the STICK-80 or the TRISSTICK. Later on, Big Five Software also sold a Model III version of the TRISSTICK.