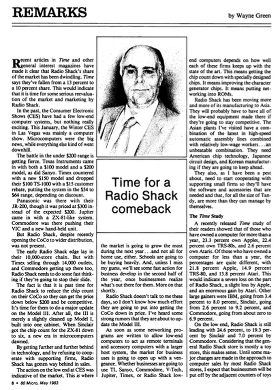 Wayne Green published several magazines at the time and wrote a different column in each. His column was “Never Say Die”1 in 73, “Publisher’s Remarks” in Kilobaud Microcomputing, “Off Color” in Hot CoCo, “Hot Cider” in inCider, and “80 Remarks” in 80 Microcomputing.

Wayne Green was a polarizing figure with many controversial ideas, but he was always interesting to read. He wrote about many topics in his “80 Remarks” columns, including education, amateur radio, the future of electronic mail, software piracy, and of course, Radio Shack. Wayne Green and 80 Microcomputing were often accused of being anti-Radio Shack or anti-TRS-80 because Wayne Green criticized Radio Shack so frequently.

He addressed this in his January 1983 column:

You know, I get letters now and then from readers who wonder why I don’t toady to Radio Shack instead of taking them to task. I try, as best I can, to reflect the educated opinions of the marketplace, not just my own. I talk with Radio Shack-owned stores, with independent Radio Shack store owners, and with many people in the industry. From all this, I get a fair idea of what is really going on, not just what Tandy sends out for PR or published in their pamphlet, which is usually self-serving. I don’t go out of my way to be critical of Tandy, but I don’t avoid it either. I try to call it as I see it.

Probably the most controversial “80 Remarks” column was in January 1982, when he reported on the widespread speculation that Radio Shack was about to discontinue the TRS-80 Color Computer:

A couple of Radio Shack dealers have mentioned the recurring rumor that Radio Shack is planing to phase out their Color Computer. I have not called the factory about this because if it is true they will probably deny it. If it is false they will also deny it. So why waste money on the phone call?

From a practical point of view, it seems a likely move. The color system seems to have been added to the line of computers more in response to the raft of inexpensive color game systems than as a serious computer.

Wayne Green often criticized Radio Shack for neglecting the Color Computer, and later in that same column, he expressed his fear that it was about to be abandoned:

This may turn out to be one of the undiscovered gems of microcomputing … brought out by Radio Shack, neglected, underadvertised, underdeveloped … and then phased into oblivion.

As it turned out, those rumors were wrong. Radio Shack not only didn’t discontinue the Color Computer at that time, but they updated it twice more before finally discontinuing the line in 1991. Although that column seems pretty tame now, Wayne Green was widely accused of trying to damage the prospects for the Color Computer, a claim that was repeated for years.

In late 1983, Wayne Green sold five of his magazines2 to CW Communications in a deal said to be worth $60 million. His final “Remarks” column, which he titled “Green Sells Out,” appeared in September 1983. “Remarks” was replaced in the very next issue of 80 Micro by “Side Tracks,” a similar column by editor-in-chief Eric Maloney and later Michael Nadeau. Wayne Green was listed as Publisher/President until the August 1984 issue. He remained listed as Founder until the final issue of 80 Micro in June 1988.

The world needs more like Wayne. He had some weird ideas now and then, but all in all he was right a lot more often than he was wrong.

He sure helped me get started in ham radio and computer programming.