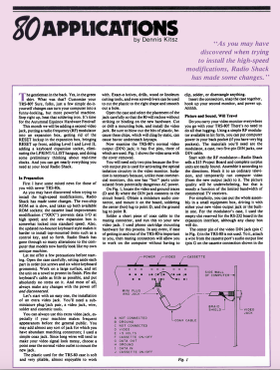 Dennis Báthory-Kitsz wrote all his articles with a very friendly and understandable style and “80 Applications” was no different. For example, his September 1981 column contains one of the best introductions to digital electronics I have ever seen.

Topics in the column covered a wide range of difficulty, from the simple, such as a February 1980 keyboard debouncing utility, to far more advanced, such as a July 1981 project to add high-resolution graphics to the Model I.

Other topics covered by “80 Applications” included:

Dennis Báthory-Kitsz wrote about some of those same topics in his book The Custom TRS‑80 and Other Mysteries.