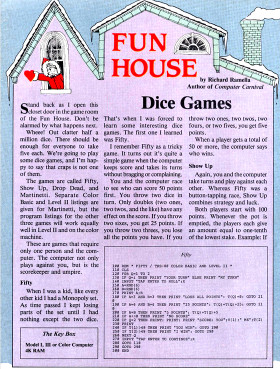 “Fun House” was one of the best remembered columns that ran in 80 Micro magazine. It was written by Richard Ramella, author of the 1982 book Computer Carnival: Sixty Programs for Starters. “Fun House” first appeared in the September 1982 issue of 80 Micro and ran until April 1984, with one gap for the February 1984 issue.

I’m going to admit only three kinds of people into Fun House: Kids, adults who have friends who are kids, and people who haven’t lost the sense of playfulness that kids have as standard equipment. Fun House is more about fun than houses. Each month I invite you to enter and open a new door. Behind each door is a different area where the activities center on a theme of the month.

Each column contained short and simple type-in programs (often, but not always games) related to that theme. Most programs would work on the TRS-80 Color Computer and the TRS-80 Model I and III. When necessary, Ramella would include separate listings for the machines. There were also occasional programs, such as Ghost Walls in the May 1983 column, that had a Color Computer version only.

An example of a theme was “Festival of Miniature Programs” in the July 1983 column. These program listings, shorter than usual, included a puzzle named Oxo, an addition game named Flash Math, a graphical game named Corral, and the graphical display Kaleidoscope. Kaleidoscope had different program listings for the Model I/III and Color Computer versions and they behaved quite differently.

Another theme example was “Dice Games” in the February 1983 column. That column included program listings for the games Fifty, Show Up, Drop Dead, and Martinetti. The programs were short and simple enough for even a programming beginner to understand.

Richard Ramella didn’t intend “Fun House” to be a programming tutorial, despite the focus on simple programs:

Fun House is not meant to teach programming, though the simple methods can be good material for the beginner.

But I know many people who were inspired to learn how to program by carefully examining the listings in the column.

“Fun House” ended with the April 1984 issue of 80 Micro, a victim along with “The Gamer’s Cafe” of the magazine’s shift in focus away from games. It ended simply, much like it began, with this statement:

Now, turn your back and count to 100 slowly. When you turn around, I will be gone.

Matthew, thanks for the kind memory of the little programs I fielded in those days. Richard