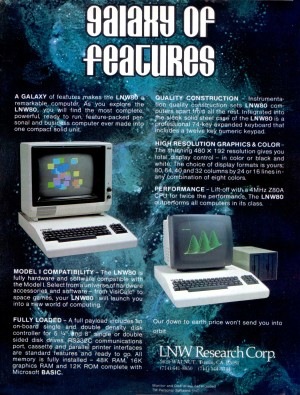 LNW80 advertisement from the September 1982 issue of 80-U.S. Journal

The LNW80, sometimes referred to as the LNW80 Model 1, was the first in a line of TRS-80 compatible computers sold by LNW Research Corporation (later known as LNW Computers). It was probably the most successful of the TRS-80 compatibles sold in the United States. LNW Research had already created the LNW System Expansion, a replacement for the Radio Shack Expansion Interface, so the LNW80 was in many ways a natural next step.

When the LNW80 was introduced in 1980 it was originally sold as a $89.95 “semi-kit,” with instructions and bare printed circuit board. The semi-kit price was so low because all of the electronic parts required for the kit had to be purchased separately. Careful shopping could help reduce costs, but the complete inventory of parts cost hundreds of dollars.

Despite the name, the LNW80 “semi-kit” was not a project for beginners; according to Dennis Báthory-Kitsz in his “80 Applications” column in 80 Micro there were 1,800 individual solder connections. For customers who wanted a complete computer, the LNW80 could also be purchased fully assembled, along with the LNW System Expansion, for $1450.00.

The LNW80 boasted complete hardware and software compatibility with the TRS-80 Model I and offered these enhanced features:

Just like the Model I, the LNW80 could use the LNW System Expansion to add 32K of memory and floppy disk support. Other options included:

According to the advertisements, the $84.95 LNW80 case was designed to house the LNW80, the System Expansion, and the power supply all within one unit.

The advert mentions the graphics resolutions of that machine which seems interesting enough to re-post here:

Mode 2 uses high res graphics memory to colorize the mode 0 graphics. This results in 128×48 dots with 8 colors per dot. This mode could be used to ‘colorize’ the standard TRS-80 games when loaded with special software.

Mode 3 uses low res character memory to colorize the high res pixels. This results in 384×192 pixels on 128×48 color fields. Per color field a foreground and background color is selected from the basic 8 colors. The colors are white, green, yellow, red, magenta, blue, blue-green and black.