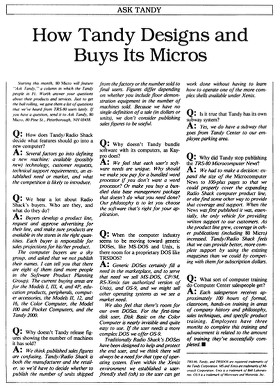 “Ask Tandy” was a column that appeared in 80 Micro magazine from the November 1984 to the September 1985 issues. It was described as “a column in which the Tandy people in Ft. Worth answer your questions about their products and services.” “Ask Tandy” was an official source of TRS-80 information from the notoriously secretive Radio Shack.

Because 80 Micro was the most popular magazine (by far) for Radio Shack TRS-80 users, cooperation from Radio Shack might have seemed like an obvious idea. But the relationship between Radio Shack and 80 Micro had always been strained, particularly while Wayne Green still owned the magazine.1

Radio Shack had a much closer relationship with the TRS-80 magazine 80-U.S. Journal, but that magazine had ended with the March 1984 issue. Radio Shack’s official TRS-80 publication, the TRS‑80 Microcomputer News, had also ended with the June 1984 issue. Many people thought that the “Ask Tandy” column marked a new chapter of cooperation with 80 Micro.

Each “Ask Tandy” column answered around eight to ten reader questions. The answers covered a wide range of topics, from giving reasons as to why the Model 4 didn’t have a detachable keyboard, to verifying that the Model I was no longer being produced in Japan or anywhere else in the world2, and quashing stories about the long rumored (but never produced) Model 5.

Regular readers might have wondered why there were only three questions answered in the September 1985 “Ask Tandy” column. As it turned out, September 1985 was the last column but the reason for the cancellation was certainly unusual.

It all began with a news item praising the Tandy 1200 computer in John C. Dvorak’s “Inside Track” column in the June 10, 1985 issue of InfoWorld:

If you haven’t been to a Radio Shack store recently, then you should go to look at the Tandy 1200 – an IBM PC XT clone made by Tandon. Tandy is selling this machine with a 10-megabyte hard disk but no monitor for $1,995.

More than a month ago, it was selling for $2,495, and three weeks before the new price was announced some clerk sent out a memo to all the dealers telling them about the price reduction. All the salespeople called all their customers and told them to wait three weeks! It cost the company $6 million in lost sales – no small potatoes. I’ve played with the 1200 and think it’s a charmer. My Tandy source tells me to watch the price drop another $500 in the months ahead. Imagine, $1,495 for a PC XT. Now you’re talking!

This probably seemed like a minor item to most readers, but the August 5, 1985 InfoWorld contained a letter from David Beckerman, Radio Shack Vice President of Advertising. In it, he expressed Radio Shack’s displeasure at the Tandy 1200 price reduction rumor:

There is not a single shred of truth to this supposed rumor, nor are there any knowledgeable Tandy executives or “Tandy sources” who are even contemplating this type of price reduction, considering the manufacturing costs currently involved or anticipated.

It is my belief that this is a malicious attempt by Dvorak to see how many more millions in lost Model 1200 sales he can cost us “in the months ahead.” After all, if three weeks supposedly cost Tandy $6 million, the “months ahead” would certainly be more costly. This is, to me, a classic case of irresponsible, malicious, destructive abuse of the journalistic privilege.

I have, therefore, instructed my Media Department to immediately cancel all contracts for advertising in InfoWorld and in all 60 other CW Communications computer publications, regardless of group or geographic control.

I have also instructed my Marketing Information Department to cease all communications with your publications.

Although 80 Micro had no possible connection to the InfoWorld item, it was (at the time) owned by the same parent company. As a result, all cooperation from Radio Shack ceased and “Ask Tandy” was no more. In the January 1986 issue, 80 Micro columnists Dave Rowell and Terry Kepner answered the remaining reader questions as best they could in a special section of “Reader Forum."3

The Radio Shack boycott didn’t last for long. The move was widely ridiculed as an overreaction and only resulted (not surprisingly) in even less media coverage for Radio Shack computers. Advertisements from Radio Shack returned in the January 1986 issue of 80 Micro. But the damage had been done by that time.

In March 1986, Radio Shack began advertising once again in InfoWorld. One of their March advertisements showcased the Tandy 1200 at its new price of $1,499.00.