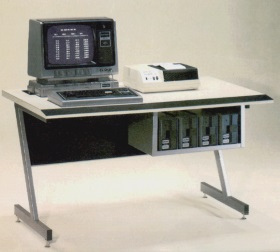 Here’s a description of the TRS-80 System Desk from a 1979 newspaper advertisement:

Serious computer users can integrate expanded TRS-80 installations into our attractive, functional desk unit. The keyboard and Expansion Interface fit into recessed spaces in the desk top, with interconnecting wiring concealed. A bay under the right side of the desk can house from one to four Mini-Disk drive units. A TRS-80 Quick Printer can sit on the right side of the desk with work space left over.

Unlike most of Radio Shack’s later computer desks, the desk material was not wood. It was described as “sturdy gray metal, with a white top, trimmed with a black ‘comfort edge’in front.” The Model I keyboard unit and Expansion Interface fit into recessed areas that made them look as though they were built into the desk.

Floppy drives were placed underneath the Model I, on a shelf to the right. Proper ventilation could be a problem when multiple floppy drives were used. This was mentioned in the May 1979 issue of the TRS-80 Microcomputer News:

You may have noticed that the rear of the Disks can get rather warm — this is normal, but it is desirable that air move freely over the Disks to hold temperatures at a satisfactory level.

For systems with more than two floppy drives, Radio Shack recommended the $29.00 Model I Fan Kit (catalog number 26-1303). The Fan Kit was especially easy to install in the TRS-80 System Desk because all the necessary mounting holes were already in the desk. 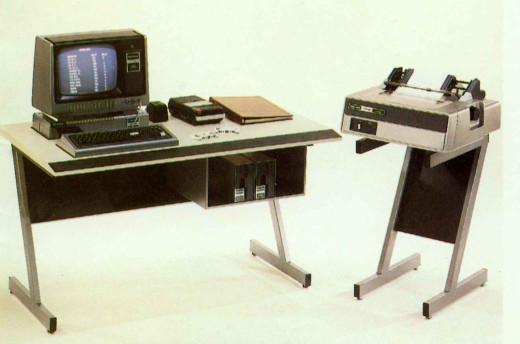 It was also called the “Z-table” because of its table-leg shape. At the time, the concept of “recessed” cut-outs in the tabletop was unique…and…extremely practical for the TRS-80 Model I systems.

I bought one and donated it to our daughter’s school when I transitioned to PC systems.

I still have my TRS-80 desk with drive bay. My desk’s bay is half the size of the one in the picture. It originally started off with my Model III, then Tandy 1000, and now it has some sort of Core2 processor system on it. It has held up well, and it is cherished because it once held my first computer.

The one I have has a drawer under the drives, same too it was advertised with the Model 2. Still looks brand new!!