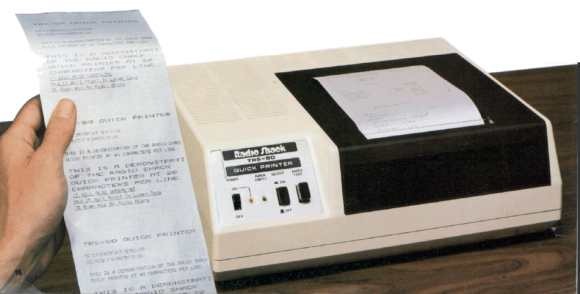 The TRS-80 Quick Printer (catalog number 26-1153) was an early TRS-80 printer sold by Radio Shack. Introduced in 1978 for a price of $499.00, the Quick Printer was actually a rebranded Centronics Microprinter P1.

Unlike the more common dot-matrix or daisy-wheel printers (such as the TRS-80 Line Printer or the Daisy Wheel Printer II), the Quick Printer was an “electrostatic” printer that required special aluminum-coated paper. Radio Shack sold a package of three rolls of the 4.75″ wide “aluminized electrostatic spool paper” (catalog number 26-1405) for $16.95.

The Quick Printer worked by electrically burning away the aluminum coating of the paper. With the aluminum burnt away, the black backing paper underneath was exposed. The printing/burning process created both a very distinctive odor and sparks that were clearly visible when printing in a dark room.

Characters were created using a 5 by 8 matrix at a maximum speed of 150 lines per minute. The output, described as “black-on-silver,” reproduced well on photocopiers. The paper was said to be “unaffected by light, heat, or humidity” but it was best handled only by the edges because the aluminum coating could wear off.

The Quick Printer II was unusual in that it offered three different ways to connect to the Model I:

Only the cable for a card-edge connection came with the Quick Printer II. The $19.95 parallel printer cable (catalog number 26-1406) had to be purchased separately.

Radio Shack listed the Quick Printer II in their catalog until 1982, but they continued to sell sold both kinds of aluminum paper for many years.