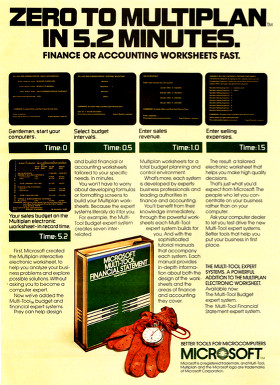 Microsoft Multiplan advertisement from May 1983 BYTE

Originally code-named “EP” (for “Electronic Paper”), Multiplan was written to use a very clever p-code compiler system created by Richard Brodie. This p-code system, which was also used later by Microsoft Word, allowed Microsoft to target Multiplan to a huge number of different 8-bit and 16-bit computer systems. (Charles Simonyi once estimated that Multiplan was available for 100 platforms.) 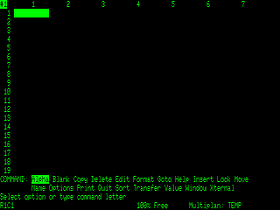 Over the years, Radio Shack sold many versions of Multiplan for different TRS-80 models:

Some articles refer to a Model III version of Multiplan, but no such version seems to have existed. 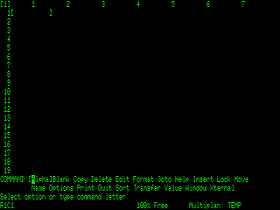 The various TRS-80 versions of Multiplan used different file formats, but data could be shared by importing and exporting in the SYLK format. Many modern spreadsheets, including Microsoft Excel and LibreOffice, can still import SYLK files. 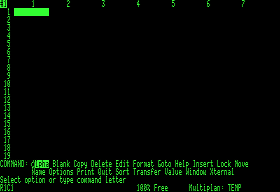 Multiplan for the Apple II

Multiplan is an electronic worksheet — a large grid of entries, each of which can be made up of words, titles, numbers, or formulas. You can set up the Multiplan worksheet with titles and numbers. Moreover, Multiplan can replace your pen and paper and your calculator because Multiplan can perform the calculations for you.

Model 4 Multiplan was a very powerful spreadsheet, with more features than VisiCalc. The main criticism of the Model 4 version of Multiplan was that it was slow. As the otherwise favorable review in the June 1984 issue of 80 Micro stated: “Multiplan for the Model 4 is no speed demon.” Although Multiplan had more features, many people preferred VisiCalc because it was noticeably faster. 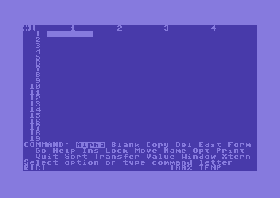 Multiplan for the Commodore 64

Part of the speed problem was automatic recalculation, which although very useful, was enabled by default and tended to slow everything down. Another problem was Multiplan’s reliance on overlays, which slowed down the system unless the files were placed on a RAM disk or hard drive. But the main problem was sluggish screen handling. Model 4 Multiplan wrote to the screen character by character, the slowest method to update the Model 4 screen. Multiplan’s support for variable width columns made matters worse by frequently requiring the screen to be completely updated.

But Multiplan was a popular program and many people installed speed-up boards to make it faster. It remained the most powerful Model 4 spreadsheet available until David Goben released BCX in 1991. 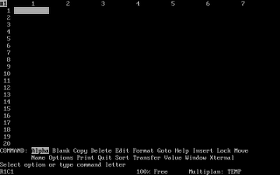 Multiplan for the IBM PC

Multiplan is sometimes described as a failure, but that hardly seems appropriate. By September 1985, Microsoft had sold 1,000,000 copies of Multiplan, around the same number of copies sold of VisiCalc.

But Lotus 1-2-3 turned out to be Multiplan’s real spreadsheet competition. Lotus 1-2-3 dominated the IBM PC spreadsheet market and Multiplan was never able to challenge it. The reasons why were debatable, but the consensus within Microsoft was that targeting Multiplan for so many computers, particularly 8-bit computers, had been a mistake. As Charles Simonyi said in an interview:

We were betting on the wrong horse — the mixed market with a variety of systems, instead of the right horse, which happened to be also ourselves, namely MS-DOS. 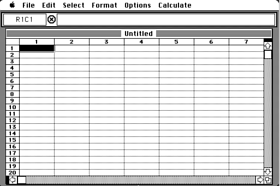 Multiplan for the Apple Macintosh

Multiplan turned out to be the last program Microsoft released for the Model 4. Microsoft was rumored to be readying a Windows version of Multiplan in 1985, but that never happened. Instead, Microsoft released a completely redesigned spreadsheet (also by Douglas Klunder) named Excel. Excel ran on only three platforms: the Apple Macintosh (in 1985), Microsoft Windows (in 1987), and OS/2 (in 1989).

In a 1993 interview with the Smithsonian Institution, Bill Gates described Multiplan as a “great product” but said the 8-bit compatibility had been a mistake:

Multiplan, targeting the 8-bit machines instead of just relying on the next generation to come, the IBM PC generation, that was a huge error. When we talk about, “Are we aiming too low, in terms of system requirements, we often think, is this another case like Multiplan?”

But that “error” with Multiplan influenced the strategy Bill Gates chose to use for Excel:

There was a question of whether to do it in the character-mode environment, or whether to move up to the next generation, which was graphical. And we said, “Okay, we’ll let them dominate the DOS-character world. We are going after Mac and Windows. We are going to be a generation ahead.”

Another excellent article. Thanks Mr. Reed for the research and work that went into this. The “another case like Multiplan” Gates quote is especially fascinating and demonstrates the significant role this title held.

I had not heard of Goben’s BCX. Was it sold in Radio Shack stores? Was it very popular?

First Used Multiplan Program in 1984. I was running a small business and configured the program for bookkeeping and accounting. Worked Great. Used it for 10 years until 1994 when my ATT Ms Dos based computer finally died. I didn’t know it was a forerunner of Excel.

Hope that will be of your interest…