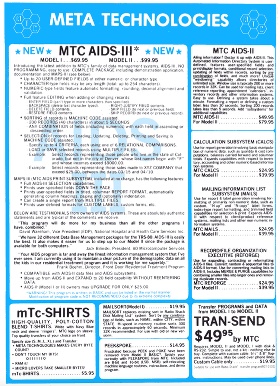 According to Robert Fiorelli, the first version of the AIDS software came about after he was asked to make a presentation about information management to the Northern Ohio TRS-80 Business Users Group (NOBUG) in August 1979. To go along with the presentation, he (with help from Alan Becker, Wendy Sayer, and Robert Schneider) wrote a simple data-management program called AIDS (Automated Information Directory System).

The AIDS program was a hit with the attendees, who requested an enhanced version. That enhanced version was called AIDSPLUS and was sold through Meta Technologies Corporation.

With the success of AIDSPLUS, Meta Technologies decided to enter the national TRS-80 market in 1980 with another improved version named AIDS-II. AIDS-II was advertised in the premier issue of 80 Microcomputing in January 1980:

Ailing Information? Doctor it up with AIDS-II. This Automated Information Directory System is user-defined, features user-specified fields and print/display formats, conditional record selection, updating of fields within records, sorting by any combination of fields, and more! Directory size is limited by available memory — will typically handle 200 records or more in 32K. Greatly expanded product based on the very popular AIDS system.

In late 1982, the Centers for Disease Control in the United States standardized on the name AIDS for a disease that had been first clinically observed in 1981. The news media and public began using the name AIDS soon after.

This common usage suddenly gave the name AIDS-III a very bad connotation. Much like the Ayds appetite-suppressant (which was popular in the early 1980’s), sales of AIDS-III must have suffered badly as a result. SofTrends renamed AIDS-III to Promise! sometime in 1983.

Meta Technologies went out of business in early 1984. SofTrends continued selling Promise! until at least 1985.

Best I remember (and I worked at Meta Tech in ‘81/‘82), Glenn Emelko deserves most of the credit for the development of the assembly language version of AIDS-III. His knowledge of the internal workings of the TRS-80 were vital to getting so much out of the box.

One reason AIDS was so fast is that it kept all the data in RAM, something that wouldn’t fly in the industry for very long, but it was key to the speed and responsiveness of the program.

The mail order business had become very cut throat, and selling Epson Printers at near cost was not a sustainable economic model.

Thanks for the memories, Matthew.