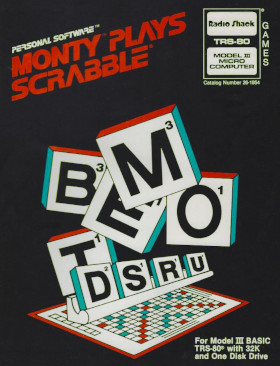 Cover of the Radio Shack version of Monty Plays Scrabble

Monty automatically keeps track of the score and can pick tiles for all players (although this can be disabled). An official Scrabble board is required that the players need to keep synchronized with the computer board. The manual recommends that all tiles be stored with the letters visible (which is the opposite of a normal Scrabble game). This makes it much easier to place the tiles on the board to match the moves made by Monty. 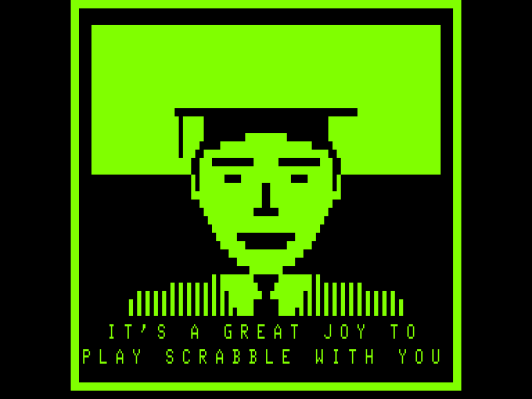 The TRS-80 version of Monty Plays Monopoly has a dictionary with 54,000 words, which is why it requires a disk system to store the dictionary. This is still many fewer words than an actual dictionary3, which is mentioned in the manual:

Although MONTY has a huge vocabulary, he may on rare occasions make a mistake. It is recommended that you use an unabridged dictionary or the “Official SCRABBLE® Players Dictionary” to resolve any questions concerning the validity of a word.

The game has four skill levels: Novice, Intermediate, Advanced, and Scholar. Monty’s “thinking” is much slower at higher levels. As Monty says in the manual, “It’s only at the highest level that I use my full potential.” According to December 1983 review in 80 Micro, the Scholar level requires three minutes of disk access before making a move. The Model III TRSDOS disk that Monty Plays Scrabble disk came on was protected and couldn’t be copied4. This seems like a really bad idea for a program that accesses the disk so heavily.

Monty Plays Scrabble has two interesting features. It is possible to create a purely computerized two-player game with Monty playing both sides. This can be done simply by giving the other player the name of “Monty.” Another feature is that Monty’s tiles and the player’s tiles can be exchanged at any time by pressing SHIFT+S while viewing the Scrabble tiles. 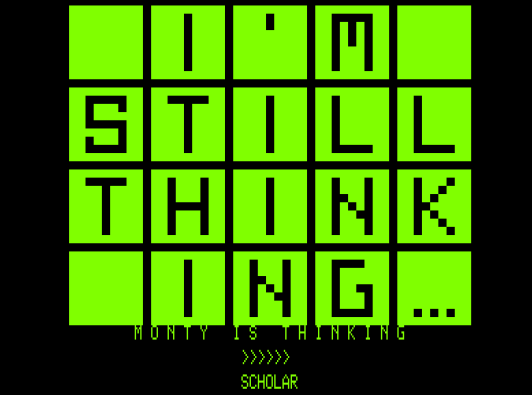 Ritam sold versions of Monty Plays Monopoly for the Apple II and IBM PC and also as a standalone handheld device5. Later, Leisure Genius licensed the game from Ritam and produced versions for a number of computers. Some of these later games dropped the Monty name and used the name Computer Scrabble instead. A 1989 manual mentions programs for the Apple II, IBM PC, Commodore 64, Atari ST, Apple Macintosh, and Commodore Amiga. Curiously, the manual also states that these versions had only a 20,000 word dictionary, meaning a smaller dictionary than the TRS-80 version.