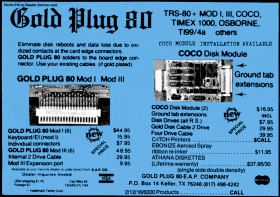 I’m sure that anyone who ever used a Model I still remembers that the best to way to remove the oxidation was to use a pink rubber eraser to scrub the connectors. The usual recommendation was to clean the connectors every month but many people did it every week.

Gold Plug 80, produced by Edward Alexander “Ed” Pruitt through his E.A.P. Company, was one of the best ways to permanently stop the reboots. It consisted of card-edge plugs with gold-plated contacts which were soldered in place over the connectors on the TRS-80 itself. Unlike most other metals, gold doesn’t corrode in the presence of oxygen. The plugs were available either individually or as a set for the entire computer.

The only downside of installing gold-plated contacts over the originals was that this caused the connectors to protrude slightly from the Model I case. This was purely a cosmetic difference and not very noticeable.

Some soldering skills were required to install the Gold Plug 80. As the installation instructions stated:

Installation of the Gold Plug 80 requires soldering to the card edge connector of the TRS-80. If purchaser is not proficient in soldering methods for printed circuits, experienced help should be sought.

It was still a lot easier and safer than gold-plating the connectors yourself, a process involving electrolysis and cyanide!