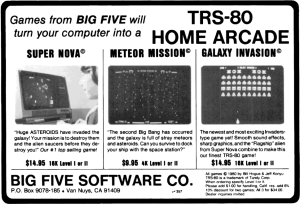 Galaxy Invasion was the first Big Five Software game to feature sound and music. In addition to the tune that plays during the title screen, there are many different sounds during the transitions between screens and when shots are fired. 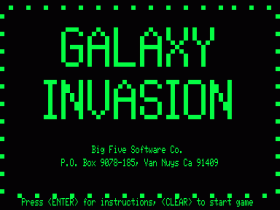 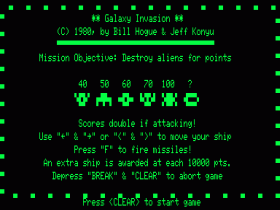 The game starts with your ship at the bottom of the screen and a formation of different kinds of aliens at the top. You move your ship from side to side and you can fire up (although only one shot at a time). The aliens periodically attack by swooping down and dropping bombs on you. You receive points for shooting an alien, and double points if you shoot it while it is attacking. What makes the game interesting is the distinctive behavior of the aliens. Each type of alien has a slightly different role and behavior. For instance, one type of alien acts as a bodyguard to the Flagship. 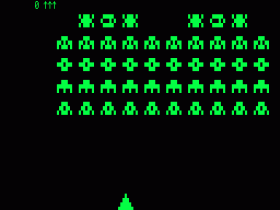 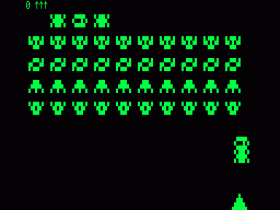 The Flagship makes an approach

Galaxy Invasion features the return of the Flagship, last seen in Super Nova. If you don’t destroy one of the Flagships on screen within a set time, then a “Flagship Attack Alert” starts. An continuing alert sound signals to you that a Flagship must be destroyed.

If the “Flagship Attack Alert” expires before you can destroy a Flagship, then all of the Flagships on screen will fire lightning bolts at you. Unlike the lightning bolts in Super Nova, these are always fatal. 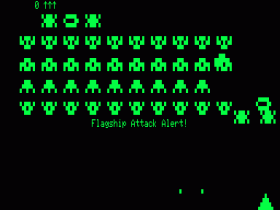 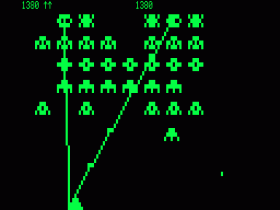 After you pass 200,000 points, the “Flagship Attack Alert” is on all the time that a Flagship is on screen. As your score increases, more Flagships fill the top row of the screen until they occupy it completely. 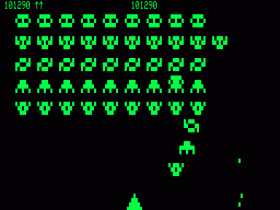 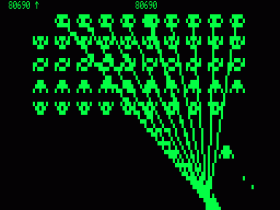 All the Flagships strike!

Galaxy Invasion is one of my favorite TRS-80 games. It takes full advantage of the limited resolution of the TRS-80 screen and actually makes that work to its advantage. In my opinion, the combination of smooth gameplay and clever sounds makes it one of the best example of a TRS-80 game ever written.

Hello. I remember “Galaxy Invasion Plus”.

I remember playing this game on a friend’s system 80 (trs-80 clone) and once (and only once) we had a ‘flagship attack alert’ lightning strike miss the ship which was not destroyed. So (either by bug or intention) the lightning strike is NOT ‘always fatal’, but so close to always that it might as well be…

Interesting comment by Jax. Maybe the linghtning strike missed because it is aimed at the lower left corner of our ship? And maybe only when the flagship is in the top left corner and we are in the lower right corner? I have to try that!

Galaxy Invasion is definitely one of the best games ever written. I loved it when I was 14 and I love it now at 41. :)

Finally I was so good at that game that I got more than 1 mio. points and quitted playing just because I got too tired.