CompuServe was the most famous of the early online services and the one with closest ties to the TRS-80. It actually started in 1969 as a timesharing system, renting mainframe computer time to businesses over phone lines. However, what most people remember as CompuServe dates to August 1979, launched as an online service for microcomputer users named MicroNET.

MicroNET opened the CompuServe network, normally reserved for businesses, to consumers with a telephone modem. Access was only available outside of business hours, when their mainframes were normally idle. MicroNET provided more or less raw access to the CompuServe mainframes running the TOPS-10 operating system. Users could use the included programs or create and run their own programs on the system. 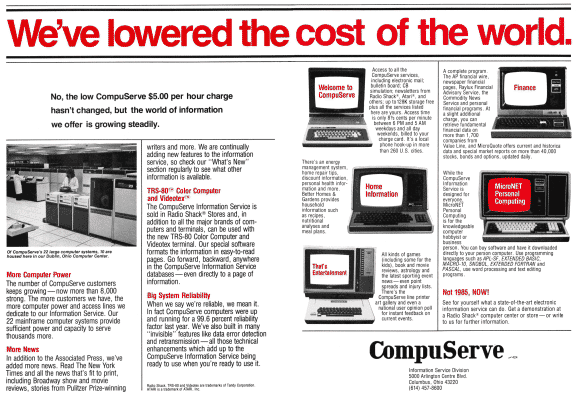 On July 1, 1980 CompuServe rebranded their consumer service as CompuServe Information Service or CIS. The name MicroNET lived on as the “personal computer” area, but a simpler to use menu system became the main user interface.

At the same time, Radio Shack became the exclusive retailer for the CompuServe starter kits, which included the necessary software and one hour of free time on CompuServe.

The era of instant, convenient access to up-to-the-minute electronic information and services is here today, according to a joint announcement by Radio Shack and CompuServe Incorporated.

Radio Shack, through its nationwide chain of Radio Shack Computer Centers, Radio Shack stores and dealers, will be the exclusive retailer of the software necessary to access the CompuServe Information service through microcomputers such as its TRS-80, or by means of “dumb” information terminals.

Beginning August 1, microcomputer users with Radio Shack’s new TRS-80 VIDEOTEX software package will be able to access data provided by CompuServe through its national packet switching and computer network. This is presently available in more than 230 markets on an inexpensive local-call basis.

Initially, the network will offer a variety of services at a low hourly rate, including: major news services, electronic mail and bulletin board service; educational and financial programs; a securities information service and various computer games.

Not surprisingly, most people used CompuServe during non-peak hours. Those prices only included the CompuServe charges; anyone not fortunate enough to live in a city with a local access number also had to pay long distance or network access charges ($2.00 an hour for Tymnet).

To put these prices in perspective, in 1981 the federal minimum wage in the United States was $3.35 an hour.

CompuServe offered many features to attract users, many of which mirror services available on the Internet today. Some of those services included:

The menu system could be bypassed by typing in a destination directly using the “Go” command. Popular TRS-80 related destinations included:

The CompuServe electronic mail service, originally called the MicroNET Electronic Mail System, was one of the few nationwide options for electronic mail. It was a major reason why many people used CompuServe.

CompuServe used eight digit octal numbers to identify each user. For example, the address to submit information and ideas to the TRS-80 Microcomputer News was 70000,535.

One of the popular features of CompuServe was the Special Interest Groups, also known as SIGs or forums. The original software powering the SIGs was created by Richard Taylor. He rewrote Message-80, his TRS-80 BBS software, to run as a multi-user BBS on MicroNET. His new program was named CBBS.CMD and could be run from his personal directory using the command: IRUN CBBS.CMD[70161,101]. It powered MNET80, which was the original SIG. Although MNET80 was a TRS-80 forum, there was no official connection of any kind to Radio Shack.

Richard Taylor also created SIGs for other people and companies, leading to a total of eight by 1981. It’s interesting to note that of those eight SIGs, three were related to the TRS-80.

Later on, there were other TRS-80 related SIGS, such as the Color Computer SIG, the Model 100 SIG, and the TRS-80 Professional SIG. As the TRS-80 software market contracted, it was inevitable that those SIGs would start to disappear.

In 1985, CompuServe closed down MNET80, which at the time was its longest running SIG. Bob Snapp, president of Snappware, said:

The Model I is gone; the Model III is up for sale. They, like MNET80, have been replaced by the next generation. In any event, it is always sad to see the passing of an old friend.