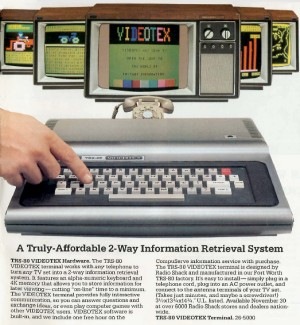 In the early 1980’s, many people thought that interactive computer services over the telephone would be the “next big thing.” TRS-80 VIDEOTEX was Radio Shack’s solution for accessing centralized information services such as CompuServe, The Source, the Dow Jones Information Service, or custom VIDEOTEX services. It was described as “two-way information retrieval system for home or office use.”

Here’s a description of TRS-80 VIDEOTEX from a 1981 Radio Shack catalog:

Imagine having a public library that never closes right in your home or office! Or volumes of stock market data at your fingertips! Picture a continuously updated newspaper you don’t have to fetch from your doorstep! Or a low-cost electronic mail service!

VIDEOTEX makes interactive information retrieval a reality anyone can take advantage of—today! You simply dial a phone number, press a few keys, and watch the desired data appear on your TV or personal computer screen!

Before long, you’ll no doubt see many information suppliers offering data you can access with your TRS-80 VIDEOTEX system. You might even see electronic shopping, banking, car rental, classified ads, travel and theater reservations!

Radio Shack sold versions of their VIDEOTEX Software package for the Model I and III, Model II, Color Computer, and the Apple II for $29.95. In addition to communications software, each package contained:

A separate modem was still required, but the VIDEOTEX software allowed any computer user to access online services such as CompuServe or bulletin board systems.

The potential audience for VIDEOTEX was thought to be greater than the small percentage of households in 1980 that owned a computer. The TRS-80 VIDEOTEX Terminal was a standalone unit aimed at those households not yet equipped with a computer. It cost $399 and shared much of its hardware with the TRS-80 Color Computer, which was introduced later that year. From a 1982 Radio Shack catalog:

Any business or organization that wanted to set up a custom VIDEOTEX system needed a special server. The TRS-80 VIDEOTEX Network System was a complete package of hardware and software to implement such a system. Here’s a description from a 1982 Radio Shack catalog:

The TRS-80 VIDEOTEX Network System is a complete, low-cost data communications network designed for commercial, corporate, and private-interest applications. Now any organization can provide newsletters, industry news, medical or agricultural reports—virtually any information that requires up-to-the-minute status—to any member (or customer) equipped with our inexpensive TRS-80 VIDEOTEX Terminal. The System includes a Data Base to input and update information, a Store and Forward System to retrieve and forward desired information, and a Multiplexor that allows the system to handle up to 16 phone calls simultaneously.

According to an article in 80 Microcomputing, several newspapers, including the Tiffin, Ohio Advertiser-Tribune, purchased the $20,000 system to create their own electronic newspapers.

Radio Shack had great hopes for TRS-80 VIDEOTEX, and many people felt it could revolutionize access to information. The chairman of Tandy Corporation, Phil R. North, expressed that view:

With under $30 software and under $400 hardware options, we think Radio Shack could well be first in line in a technology that’s certain to become a rather massive reality in the 1980’s.

But TRS-80 VIDEOTEX achieved only a limited success. It faced a number of obstacles:

I suspect that the unwillingness (or inability) of most people to pay the hourly costs for services such as CompuServe also played a role.

But I find it interesting that the services touted for TRS-80 VIDEOTEX did eventually become common two decades later on the Internet. Here’s an example from Jon Shirley’s “View From the 7th Floor” column in the December 1980 issue of the TRS-80 Microcomputer News.

The first time I logged in at home with a Color Computer it was a Sunday evening, too late for the news and I wanted the NFC results. I was on for 40 minutes but when I had signed off I had read not just the full stories carried the next day our local paper on Dallas and Houston but also in-depth game coverage of other games that would only get a summary in our paper. … In addition to AP news and news from an ever increasing list of other newspapers, there is weather, world wide sports coverage (interested in Australian kangaroo race results?), electronic mail to other CompuServe users, Better Homes and Gardens information, our newsletter (if Ed ever gets anything on it), games, stock market and commodities information and more to come including H&R Block tax tips.

How many items in that description are available on the Internet today?

“How many items in that description are available on the Internet today?”.. just the Australian kangaroo race results, that’s it.