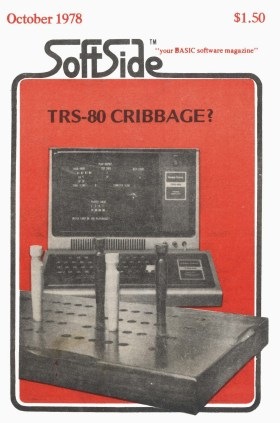 It is our hope that SoftSide will be viewed not as just “another computer magazine,” but as a different kind of magazine, the first dedicated to the most intriguing facet of computing today, that side which allows us to realize our expectations, our fantasies, our dreams.

In its earliest issues, SoftSide published mostly BASIC programs submitted by readers. Some of those programs became quite popular and SoftSide Publications published several books of programs called The Best of SoftSide. It also sold software through the TRS-80 Software Exchange or TSE (later renamed The Software Exchange).

In 1979, SoftSide Publications created a new magazine for TRS-80 programmers named PROG-80. In January 1980, they also created a companion magazine to SoftSide for Apple users named AppleSeed. After some pressure from Apple Computer, that name was changed to SoftSide: Apple Edition and the original SoftSide was renamed SoftSide: S-80 Edition. 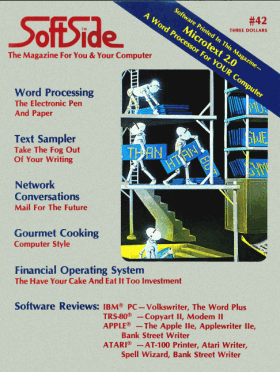 In August 1980, both PROG-80 and SoftSide: Apple Edition were folded back into SoftSide: S-80 Edition, which reverted to its original name. Another big change was that SoftSide was printed as a full-sized magazine, rather than the digest format that had been used up to that point. As they put it:

In addition to the Apple II, Atari content was also added to SoftSide with the August 1980 issue. The platform specific content was eventually labeled within the magazine as TRS-80 Side, Apple Side, and Atari Side. Later additions were PC Side (for the IBM PC) in 1983 and Commodore Side in 1984.

Later issues of SoftSide published mostly reviews, news, and general purpose articles, rather than BASIC programs. The February 1984 issue of SoftSide was the first with no TRS-80 content at all. There was at least one more issue published, but SoftSide was finished by at least August 1984.