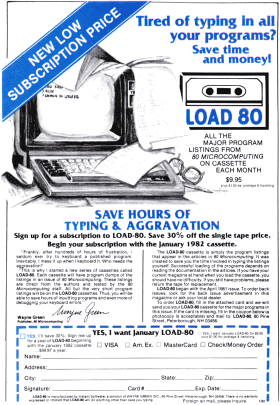 LOAD-80 advertisement from the January 1982 issue of 80 Microcomputing

Like most early microcomputer magazines, 80 Microcomputing published many reader submitted programs. These programs were among the most popular features of the magazine but needed to be typed into a computer before they could be used. Typing in long program listings was time consuming and there was always the real possibility of introducing errors during the typing process.

Selling a tape containing the programs from 80 Microcomputing was an idea mentioned almost from the beginning of the magazine. That idea eventually led to the product named LOAD-80. Wayne Green, the publisher of 80 Microcomputing, first referred to LOAD-80 in his “80 Remarks” column in the April 1981 issue:

We’re aiming at making the cassette dumps of the programs available for each issue of 80 as soon as the magazines come out. They will hopefully be in stock in the computer stores carrying the magazine… and eventually they will be available by subscription.

Although the first LOAD-80 available was for the April 1981 issue, it was announced in the August 1981 issue. Wayne Green went into more detail in his column:

The idea of this project was to provide LOAD-80 subscribers with the programs in each issue of 80 on a cassette. Having typed my fingers to the bone entering some long programs, only to find that I’d made errors, I though you might appreciate this service. The time and aggravation it takes to type one program will more than pay for a LOAD-80.

LOAD-80 was published monthly on cassette as a companion to the magazine. It was available either directly through Wayne Green’s company or in many of the computer stores that sold 80 Microcomputing. Each cassette contained all of the major programs published in each issue, although occasionally some programs were omitted to avoid exceeding the 28 minute time limit of duplicated cassettes.

In order to provide support for LOAD-80, 80 Microcomputing introduced a column named “LOAD-80” in the August 1981 issue. The column name was changed to “RELOAD 80” in the next issue and continued to use that name until the column ended in April 1984.

At first LOAD-80 was only available on a cassette recorded at low speed (500 baud), readable on both a Model I or Model III. It was stated in the August 1981 issue:

At this time, there are no plans to offer this tape at the high baud rate. Model III owners should select the “L” cassette baud rate before trying to load LOAD-80. (No, we are not planning to offer a disk or Stringy Floppy version either, sorry.)

There were two spin-offs of LOAD-80: