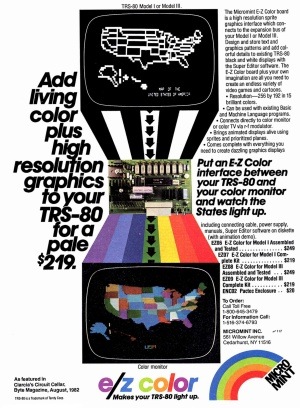 Micromint advertisement from the February 1983 issue of 80 Micro

Micromint sold several products for the TRS-80 that were based on designs that Steve Ciarcia had presented in his "Ciarcia’s Circuit Cellar" column in BYTE magazine. The Micromint E-Z Color was a color graphics interface for the TRS-80 Model I and Model III that was based on his August 1982 column. In addition to the TRS-80 version, there were also versions of the E-Z Color sold for the S-100 bus and the Apple II.

The TRS-80 version was available in two configurations:

Also included with the E-Z Color were connecting cables, power supply, manual, the “Super Editor software”, and an animation demo.

The E-Z Color was based on the Texas Instruments TMS9918A graphics controller, the same chip used by the earlier CHROMAtrs TRS-80 color graphics add-on. Because the E-Z Color and CHROMAtrs shared the same graphics chip, they also shared many of the same features. These included four video modes, prioritized sprites, and a resolution of 256 by 192 with 16 colors (including transparent). Despite the similarities, there was no software compatibility between the E-Z Color and the CHROMAtrs. Unlike the CHROMAtrs, the TRS-80 version of the E-Z Color doesn’t seem to have included any joystick or sound support.

The TRS-80 version of the E-Z Color was advertised only briefly during 1983. Although it looked like an interesting product, I don’t know of any TRS-80 software that was written to support it.