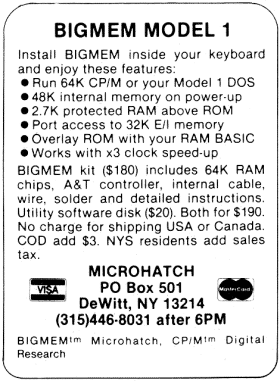 Microhatch advertisement from the June 1983 issue of 80 Micro

BIGMEM was a modification for the TRS-80 Model I which increased available memory. It was introduced by Microhatch in early 1982 for $180.00, but the price was reduced to $169.00 by late 1983. Microhatch also sold a utility disk (with print spooler) for $20.00 which could be bundled with BIGMEM. For any user unwilling to perform the modification, Microhatch would install BIGMEM for $199.00.

Much like the Holmes Internal Memory, BIGMEM replaced the 16K RAM chips inside the Model I with higher-capacity 64K chips. This avoided the reliability problems of the external memory in an Expansion Interface and also worked better with most speed-up kits.

Unlike the Internal Memory, BIGMEM included a custom memory controller which could continue to address the 32K in an Expansion Interface (if present). This provided up to 96K of total memory, although software needed to be patched to address the extra 32K. Most notable among the patches was VCXM, a $34.00 modification to VisiCalc which provided 55K of working memory.

Another important feature of BIGMEM was the ability to change the Model I memory map. Changing the addresses used by the BASIC ROM, keyboard, and screen made it possible to run CP/M on a Model I. Microhatch sold a custom version of CP/M 2.2 (with manuals) for $119.00.

BIGMEM continued to be advertised until late 1984.