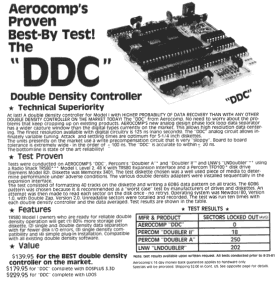 Aerocomp DDC advertisement from the February 1983 issue of 80 Micro

The Aerocomp DDC was a popular double-density add-on for the TRS-80 Model I. It was introduced in 1981 by Aerocomp Inc. of Dallas, Texas, a company founded by John Lancione.[^lancione] Aerocomp was one of the longest lasting TRS-80 companies and the Aerocomp DDC was sold for almost a decade.

When it was introduced, the Aerocomp DDC cost $149.95. This was $20 cheaper than its primary competitor, the Percom Doubler II. Aerocomp also sold the Aerocomp DDC bundled with a choice of operating systems: DOSPLUS 3.3 for $189.95 and LDOS for $239.95.

Aerocomp stressed that the Aerocomp DDC was more reliable than other doublers due to its special data separator. One January 1982 advertisement described it as “a double density controller for Model I with HIGHER PROBABILITY OF DATA RECOVERY THAN WITH ANY OTHER DOUBLE DENSITY CONTROLLER ON THE MARKET TODAY!” For owners of other brands of doublers, Aerocomp sold the DDS (double-density separator) separately for $49.95.

Aerocomp recommended using nail polish to mark pin 1 of the 1771 chip to ensure correct alignment after it was replaced. 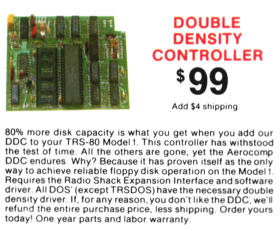 Both the Percom Doubler and the LNDoubler (the primary competitors to the Aerocomp DDC) were no longer available after 1984. Aerocomp continued to sell the Aerocomp DDC until 1991, making it one of the longest selling TRS-80 hardware products.

Aerocomp was one of the few companies to still advertise their TRS-80 products in 80 Micro after the magazine stopped covering the TRS-80. The Aerocomp DDC was advertised in the final June 1988 issue of 80 Micro for a price of $99.00. That advertisement stated:

This controller has withstood the test of time. All the others are gone, yet the Aerocomp DDC endures.

Aerocomp continued to advertise in the remaining TRS-80 publications, such as Computer News 80 and TRSTimes. (They also advertised their MS-DOS products in other magazines.) By that time, the price of the Aerocomp DDC had been reduced to $49.00.

Aerocomp closed its doors sometime around July 1991. This meant that they sold the Aerocomp DDC for nearly a decade. It was the only doubler available to Model I users for the last six years it was sold.