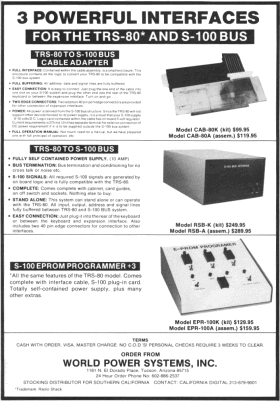 In March 1979, a company named World Power Systems began running multi-page advertisement in many popular computer magazines, including BYTE, Creative Computing, Interface Age, and Kilobaud Microcomputing. World Power Systems, founded by Jim Anderson, advertised a number of interesting and unusual products for the TRS-80 and S-100 computers at prices that seemed almost too good to be true.

As it turned out, they were too good to be true; Jim Anderson was actually a prison escapee named Norman Henry Hunt and World Power Systems was an elaborate scam that ended up costing customers and suppliers hundreds of thousands of dollars. 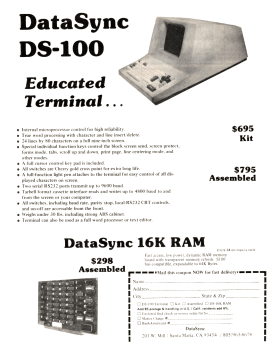 DataSync advertisement from the July 1977 issue of BYTE

In June 1977, he was accused of defrauding a Santa Maria man for whom he was supposedly designing computer hardware. “Colonel David Winthrop” was arrested and fingerprints revealed his true identity to be Norman Henry Hunt. The entire DataSync fraud was exposed. Hunt was convicted on state fraud charges and sentenced to two years, eight months at the Chino State prison in California. For some reason, federal authorities decided not to prosecute Hunt for mail fraud.

Hunt escaped from that minimum security facility in February 1978. He was sought by police, who thought it likely that he would attempt a similar fraud. The official bulletin from the Santa Maria Police Department (which was published in Kilobaud Microcomputing) was quite specific about Hunt’s favored scheme, known as a “bust out”:

His method of operation has been to move to a town under a new identity, rent a house with an option to buy and make contacts in his field of endeavor (recently, computer hobbyists). Hunt will generally begin his operation by soliciting backing for product design from private parties. Often he will sell his qualifications so well that it is the victim’s idea to ask Hunt to design a product for him.

Hunt may then start a business and solicit partners. He will rent a building, hire employees, begin a credit line with suppliers. After enough equipment has been received from suppliers on credit to look impressive, he will apply for a bank loan to start production. He will usually go to a local bank rather than a large bank chain. If the loan is received, Hunt empties the business of its equipment and leaves the area, leaving the creditors and the bank high and dry.

Hunt also orders equipment from dealers and pays by check. He then stops payment on the checks. When contacted by a dealer about why he stopped payment, he may say that the product was defective and is being returned and request that another unit be shipped. 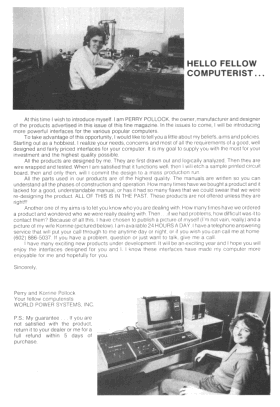 World Power Systems advertisement from the April 1979 issue of BYTE

This was a very good description of what Hunt ended up doing. Beginning again in Tucson, Arizona and using the name Jim Anderson, he started a new computer company, World Power Systems, along with a computer hobbyist named Perry Pollock. Pollock and his wife Korinne both appeared in what was probably the most famous of the World Power Systems advertisements, titled “Hello Fellow Computerist”:

At this time I wish to introduce myself. I am PERRY POLLOCK, the owner, manufacturer and designer of the products advertised in this fine magazine. In the issues to come, I will be introducing more powerful interfaces for the various popular computers.

That advertisement identified Pollock as the driving force behind the company, a fiction which would have come in handy for Hunt later after abandoning the company and its debts.

Some people were immediately skeptical of the World Power Systems advertisements. Careful readers noticed that many of the products depicted in the advertisements didn’t look real. Some circuit board layouts didn’t make sense and one board in particular was lacking any power connections at all! But these red flags, though troublesome, didn’t necessarily indicate a fraud. Due to magazine lead times, it was not uncommon for companies to show mockups of products in advertisements.

But there were enough suspicious details for some people to investigate further. One of those people was John Craig, an editor at Creative Computing. He telephoned World Power Systems suggesting a visit for a potential story. The prospect of an in-person meeting was a serious problem for Hunt, because Craig would recognize him as Colonel David Winthrop at DataSync1.

Hunt must have assumed that the game was up because he and his wife fled abruptly on April 25, 1979. The whole World Power Systems operation collapsed soon after. Perry Pollock, the designated fall guy, was arrested but soon released.

On May 30, 1979, Hunt and his wife were arrested in Honolulu, Hawaii. They were returned to Arizona where he pleaded guilty to two counts of mail fraud on September 17, 1979, facing 10 years in prison and a $2000 fine. His wife, Dinah Lee Hunt, pleaded guilty to one count of fraud.

Fascinating story! I’m sure stuff like this was much easier to pull off back then, though it obviously continues to this day.

Hello, My name is Korrine Thornell and I’m Korrine Pollock in this article. I was a young mother at the time and did not know what my husband Perry and I were getting into. The arrest was quite dramatic. What a crazy time that was! I’m surprised the story is still out there! Korrine

I found this link while researching a cryptic reference in one of Greg Hassett’s early TRS-80 text adventure games, House of the Seven Gables. There’s a room containing a smiling man who offers a gold coin, but if the gold coin is taken, the player loses all gold coins in inventory and is left with AN I.O.U. FOR 10 GOLD COINS SIGNED BY WORLD POWER SYSTEMS! Nice to know the history behind that reference, thank you for documenting the case!