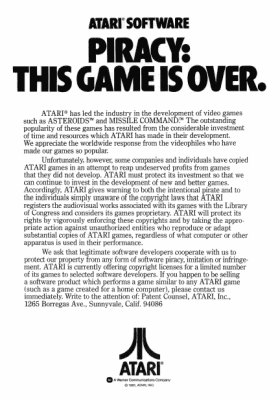 Atari, Inc. advertisement from the October 1981 issue of Creative Computing

We ask that legitimate software developers cooperate with us to protect our property from any form of software piracy, imitation or infringement. ATARI is currently offering copyright licenses for a limited number of its games to selected software developers. If you happen to be selling a software product which performs a game similar to any ATARI game (such as a game created for a home computer), please contact us immediately.

In this advertisement, Atari used the word piracy not in the ordinary computer sense of unauthorized copying of software but to mean copying an “audiovisual copyright” or “look and feel.” The concept of an audiovisual copyright was fairly new at the time, although not completely without precedent. Scott Adams, the president of Adventure International, stated in his column in SoftSide:

This new concept of audio-visual copyright for arcade games, although legally untested, does not seem to be unreasonable. Its legality has not been proven as yet, but it is logical in its concept. A big difficulty will be deciding what the measure is of similar audio/visual values when different computer systems have different capabilities.

Audiovisual copyrights were controversial and many felt that Atari was abusing its dominant position in the industry (Atari controlled up to 75% of the video game market in 1981) to ensure popular arcade games were only available on the Atari. There was even talk by some programmers of a development boycott for Atari systems.

The advertisement emphasized that Atari “has led the industry in the development of video games” and mentioned the “considerable investment of time and resources which ATARI has made in their development.” But it seemed as though a non-Atari game was the biggest focus of the campaign. In 1981, Atari bought exclusive rights to create home computer adaptations of the Namco game Pac-Man and began aggressively targeting companies selling unauthorized adaptations. Some notable targets included:

The direct effect of the Atari campaign on the TRS-80 was probably less than on other platforms. But it did have an immediate effect on some games by Big Five Software. A January 1982 Alpha Products advertisement stated:

If you don’t have your copy of TALKING ROBOT ATTACK or GALAXY INVASION, it might be too late. By legal agreement with Atari, Big Five stopped production on December 1, 1981. Our well stocked shelves will soon be empty. Order yours now before these two are gone forever.

Both games returned to the Alpha Products advertisements by the end of the year, so it would seem some agreement with Atari was reached. Later Big Five Software advertisements labeled Super Nova as containing “Audiovisual licensed from Atari.”

Despite the talk of “copyright licenses for a limited number of its games to selected software developers,” it doesn’t appear that Atari offered licenses to TRS-80 developers. As far as I know, Atari never officially licensed any other TRS-80 games. Certainly the attempt by Wayne Westmoreland and Terry Gilman to license their Donkey Kong game for the TRS-80 went nowhere.

The campaign did have a lasting impact on the TRS-80 game market. Players and reviewers had often judged earlier games based on how similar they were to the arcade originals. Although close arcade adaptations were still released, many later games, such as Sea Dragon or Crazy Painter, were based on new ideas or were composites of several games. Scott Adams had some good advice for authors:

I would like to suggest that anyone writing arcade-style software base it on original ideas. Novel and original arcade games will be best sellers, and who knows, maybe your arcade software will end up on a coin-operated machine!

Thanks for this article. This is a major aspect to creative design that I think has gone largely unnoticed and underreported. I lived through this era and didn’t even realize Atari had flexed their muscle in this way.

Would be very interesting to hear Bill Hogue’s memories of this agreement what Atari’s threat and the settlement was exactly. Did Big Five pay Atari a royalty for Super Nova based on some agreement that it was a clone of Asteroids? Which division of Atari was paid? Very fascinating.