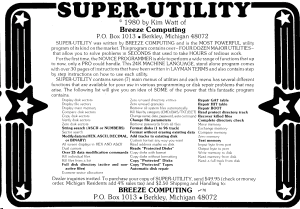 Breeze Computing advertisement from the January 1981 issue of 80 Microcomputing

I suspect that almost everyone who used a TRS-80 disk system remembers Super Utility. First released by Kim Watt in 1980 through his company Breeze Computing, Super Utility was regarded by many to be an indispensible tool. It was described in advertisements as “The King of Utilities” and readers of 80 Micro must have agreed; they voted it 1st Place in the utility category for both the 1982 and 1983 Readers' Choice Awards. According to one source, a copy of Super Utility was a required purchase for all United States government offices with a TRS-80.

This program is like a fire engine. You don’t need it every day, but when you do nothing else will do the job. 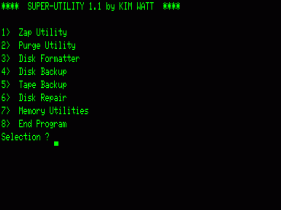 Kim Watt released the first version of Super Utility in 1980 for a price of $49.95. The first version was a 24K program for the Model I which offered utilities in seven categories:

Super Utility could perform some functions that were difficult to do using TRSDOS, such as disk backups and single-drive copies. It could also be used to do some things that were impossible with TRSDOS, such as directly editing disk sectors, copying damaged disks using retries to salvage data, or using “format without erase” to refresh a disk’s formatting.

The Super Utility disk routines were well known for being rock-solid, possibly the best ever written for the TRS-80. In all the years I used Super Utility, I never had it hang or crash under any error condition. 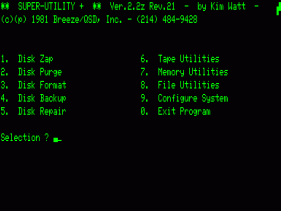 Super Utility was a must-have tool for many people which performed operations that no other program could do. But it had two notable limitations: Super Utility only ran on the Model I and its double-density support was limited.

To address these limitations, Kim Watt wrote a new version named Super Utility Plus in 1981. In addition to Model III and integrated double-density support, he added many new features, including a category of file utilities and a configuration screen for changing settings.

Another change was that Super Utility was now sold by PowerSOFT, a division of Breeze/QSD. Breeze/QSD was the result of the merger of Breeze Computing and Quality Software Distributors. The price for Super Utility Plus also increased to $74.95.

Kim Watt wrote in the Super Utility Plus manual:

During the following year, I received a lot of mail regarding that program and also requests for me to implement various other additional subroutines that people thought might make it even more versatile. I made several upgrades to the program trying to be receptive to their wishes, but then came DOUBLE DENSITY. After getting many requests to make it work with double density, I upgraded it again, but only so the ZAP option would work as I was running out of room.

We decided that an entire new program would have to be written. We made lists of all of the requests for additional options that had been received and we then proceeded to spend the next several months making the new program. The final result of our effort is called Super Utility Plus, and we hope that it will be everything that you ever wanted in a utility program. 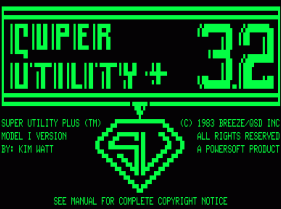 The final major revision of Super Utility was version 3, released by PowerSOFT in February 1983. It was promoted this way by a PowerSOFT advertisement:

Every few years a unique program arrives. So practical… So useful it becomes heralded by computer owners internationally as a true classic… An industry standard… Highly acclaimed by every major TRS-80 publication. You’ve seen it with only a handful of TRS-80 programs… Now experience a legend with the new… Version 3.0.

Kim Watt completely rewrote Super Utility Plus version 3 to add many new features, including improved DOS recognition, automatic detection of double-density adapters on the Model I, and double-sided disk support. In addition to the Model I/III version, PowerSOFT also sold a version for the Lobo MAX-80.

PowerSOFT also created a limited release of Super Utility Plus 3.0 named Super Utility Special Edition. This special version included the Super Utility source code and a license to use that code in programs. Only 500 copies were produced, and each copy cost $500.00.

Another version of Super Utility was PowerTool (catalog number 26-2022). PowerTool was a customized version sold by Radio Shack. It supported TRSDOS and LDOS only and removed support for all other non-Radio Shack operating systems. 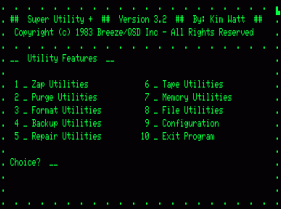 In November 1989, MISOSYS purchased rights to all PowerSOFT products, including Super Utility. MISOSYS continued to sell the Model I/III and Model 4 versions of Super Utility for several years.