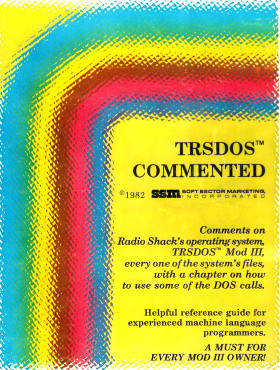 Soft Sector Marketing, Inc. is in no way attempting to infringe upon the proprietary rights of the Tandy Corporation by this publication. The expressed purpose of TRSDOS Commented is to aid users of MOD III microcomputers in using and understanding their machines.

Here is the description of the TRSDOS Commented from the book’s introduction:

This book is intended to show moderately experienced programmers the organization and inner workings of a typical Z80 disk operating system. Every function of the operating system has been decoded and explained, not to bit-by-bit detail, which would be a monstrous task, but rather at an instruction-by-instruction level. Many not-documented features of the system have been found, as well as a few errors. Hopefully, the techniques shown in the system coding will be useful as a guide to programmers interested in systems programming at an assembler level.

The TRSDOS disassembly comprises the bulk of the book and is very heavily commented. Like most books of this type, it shows all the instructions but omits the machine language hexadecimal bytes.

A more unusual detail is the treatment of self-modifying code. Like most complicated Z80 programs, Model III TRSDOS sometimes directly changes its own instruction codes to save code space or for speed. Self-modifying code tends to obscure a disassembled code listing.

TRSDOS alters the value at 5061H at another point in the code to change the drive number. This isn’t reflected in a normal disassembly. Here is how TRSDOS Commented shows the instruction:

This isn’t strictly correct, but it does show that the instruction operand is being altered elsewhere in the code.

As far as I know, there was only one printing of TRSDOS Commented in April 1982. Soft Sector Marketing went out of business in July 1983 and their books, including Alien Defense Commented, MOD III Commented, and TRSDOS Commented (in particular) became unavailable. The limited printing gave TRSDOS Commented the distinction of being generally regarded as the rarest major TRS-80 book ever published.