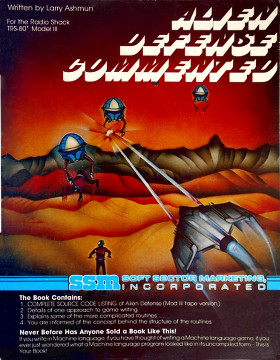 The first section of Alien Defense Commented contains Larry Ashmun’s discussion of techniques used to write TRS-80 games and specific details about how Alien Defense works. The remainder of the book (the majority) contains the complete commented source code listing for the cassette version of Alien Defense, including a cross-referenced symbol table.

Alien Defense Commented belongs to the small group of TRS-80 books with commented source code, such as Microsoft Basic Decoded and Other Mysteries, TRSDOS 2.3 Decoded and Other Mysteries, and Soft Sector Marketing’s own MOD III ROM Commented and TRSDOS Commented. But Alien Defense Commented is unusual in that it was printed from the actual program listing, rather than a detailed reconstruction through disassembly. The only other such book I know of is The Source, which contains the nearly complete source code listing for TRSDOS/LS-DOS 6.

Another difference is that the program listing in Alien Defense Commented is complete and ready to type in. Some people actually did that and assembled a working cassette copy of Alien Defense. The other books of that type were intended purely for learning purposes, not as a means to create a finished program. (You couldn’t type in and assemble a copy of the Model I ROM or TRSDOS 2.3, for example.) The reviewer for 80 Micro spent 15 to 20 hours typing in the Alien Defense source code, plus another three hours double-checking the typed-in code.

Soft Sector Marketing went out of business in July 1983, not long after the book was published. This made Alien Defense Commented somewhat rare, although suppliers continued to sell copies sporadically for several years.

I wonder if Larry Ashmun still alive and well? I would love to hear what prompted him to take such a radical step. I wish more programmer’s would have followed his example.

In the interview with J. Weaver Jr. he mentions knowing Larry. Perhaps he still has contact with him. That could also make a great interview.

Wouldn’t mind picking up a copy of this, but I’ve never seen it in the wild. In fact, I only learned of its existence a few months ago. Guessing there’s no scans available online?

Looks like this book really is rare. There is only one listed for sale on ebay and amazon and its up to $100 on an auction.