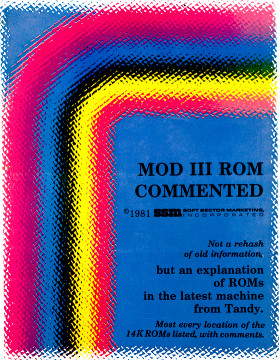 One of the best sources of information about the Model III ROM was TRS‑80 ROM Routines Documented by Jack Decker, which was published in 1983. But probably the best known was MOD III ROM Commented1 from Soft Sector Marketing. MOD III ROM Commented was published in 1981 with two printings. It contains a very detailed disassembly of the Model III BASIC ROM. As the book cover promised: “Not a rehash of old information, but an explanation of ROMS in the latest machine from Tandy.”

MOD III ROM Commented was listed as being “written under the direction of Victor Andrews of Soft Sector Marketing Inc.” with “decoding by Rick Papo”, “data entry by Pactolus Group”, and “editing by Brian Stone, Victor Andrews.”

Unlike most other books of this type, MOD III ROM Commented is composed almost entirely of the disassembled Model III BASIC code. For example, Microsoft BASIC Decoded and Other Mysteries includes four chapters of 51 pages at the beginning of the book discussing exactly how the Model I BASIC ROM works. MOD III ROM Commented doesn’t include any informational chapters, but it does provide an extensively commented disassembly of the Model III BASIC ROM.

The disassembly listing includes the assembly language instructions and comments, but not the machine language hexadecimal bytes. Since either Radio Shack or Microsoft owned the rights to Model III BASIC, this was probably done in an attempt to avoid any copyright problems. The title page of the book states:

Soft Sector Marketing Inc. has worked hard to provide you with as much information as possible about the Mod III ROM. Much of the code has been left for you to examine, but a small portion has been removed to protect the copyright of Tandy Corp.

A seven page addendum to the book lists some additional information about the Model III, including details about the keyboard, video, and printer device control blocks and some of the more useful I/O ports.