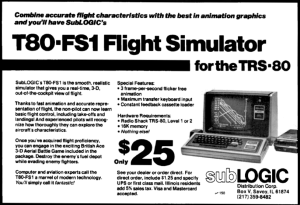 An advertisement from 80 Microcomputing

In later years, SubLOGIC also created versions for the Commodore 64, Atari 800, TRS-80 Color Computer, Apple Macintosh, Atari ST, and the Commodore Amiga. But the most famous and popular version was the one licensed by Microsoft for the IBM PC. Known as Microsoft Flight Simulator, it sold millions of copies and was updated many times until the final version was released in 2006. It was one of the last programs sold that at one time had a TRS-80 version. 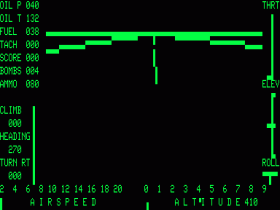 View from the runway 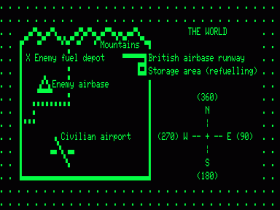 Map of the world (only available in later versions)

Although it might seem a common idea today, the concept of a visual flight simulator on a computer was revolutionary at the time. The aircraft simulation is quite accurate; according to the manual, no special routines were needed to support acrobatics. In only 16K of memory, T80-FS1 Flight Simulator offers a simulation of a Sopwith Camel with a 3D view out the windshield (albeit at a 128 by 48 resolution). The display is rendered at three to six frames per second (ten frames per second on landing with the disk version only). In addition to the windshield view, there is also a “Radar” view that lets you see an overhead view of the world with your plane in the center. Also included as part of the simulation is a World War I “British Ace” aerial battle game.

T80-FS1 was supplied on a protected cassette tape that was not copyable by normal TRS-80 utilities. It used a special loader that enables it to load on either a Level I or II TRS-80. The disk version, released in 1982, cost more ($33.50 versus $25.00), but it added several extra features such as improved frame-rate when landing and crash detection. SubLOGIC had a very liberal policy for upgrading from tape to disk. You could update to the disk version at any time simply by returning your original cassette (but not the manual) along with $10.00. That price even included first class shipping. 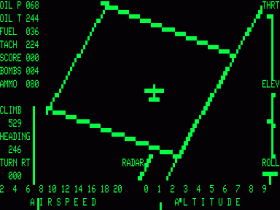 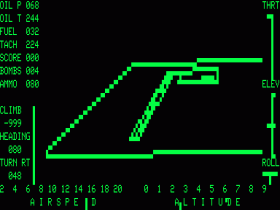 Aerial view of the enemy airbase

The TRS-80 version of Flight Simulator is often compared unfavorably to others because of the lower resolution and lack of a dashboard. But I think it is still a very impressive program and I spent many enjoyable hours mastering the intricacies of the simulated Sopwith Camel.