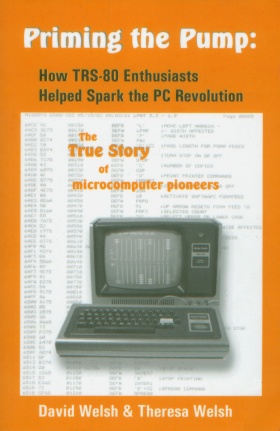 Lately, there seems to be an increasing interest in the history of early microcomputers. But for whatever reason, Radio Shack and the TRS-80 are rarely included in histories of microcomputing. Whenever the TRS-80 is mentioned, the details are often incomplete or completely wrong. I don’t know what has caused this collective amnesia, but the TRS-80 deserves to have its important contributions recognized.

Priming the Pump: How TRS-80 Enthusiasts Helped Spark the PC Revolution is a book by David and Theresa Welsh that attempts to correct this injustice. It tells the history of the TRS-80 from its introduction in 1977 to the final models in the late 1980’s and of the software and hardware that developed around it. This covers a lot of ground, and anyone who remembers anything about the TRS-80 is bound to find much to recognize. This story is fleshed out with personal observations gleaned from new interviews with many people important to the TRS-80 including:

The personal comments provide a unique perspective on the historical events, and even include information that I had never read before. 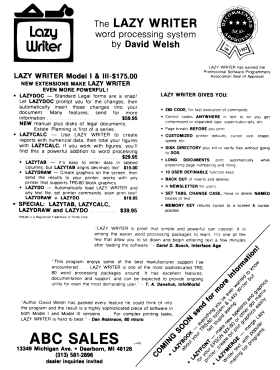 In addition to this important history, David and Theresa also tell their own personal stories in this book. David Welsh wrote Lazy Writer, one of the most popular TRS-80 word processors, and they sold Lazy Writer through their company, Alpha Bit Communications. They each wrote one chapter of this book from their own perspective detailing their experiences with technology and the TRS-80. These chapters provide not just a look at running a TRS-80 company but also an interesting view of the early 1980’s.

Whether you were involved with the TRS-80 at the time or you are just curious about what it was really like back then, Priming the Pump tells a very good story. In my opinion, it fills an important gap in the story of early microcomputers and is a must-have book for anyone who still has an interest in the TRS-80.